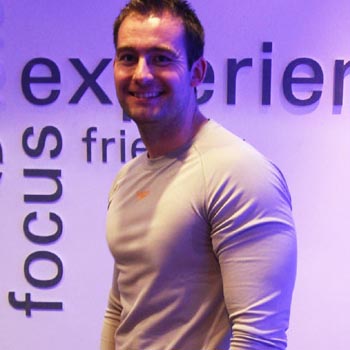 James Ketchell is a serial adventurer, motivational speaker and Scouting ambassador.
On 1st February 2014, James became the first and only person to have rowed across the Atlantic Ocean, climbed Mount Everest and cycled 18,000 miles around the world.
Seven years prior to this, he was recovering from a serious motorcycle accident that left him with broken legs as well as a severely broken and dislocated ankle. The prognosis was that he was likely to suffer a permanent walking impairment and would certainly not be able to continue an active physical lifestyle.
.
But they were wrong. James talks with candour and enthusiasm about how he responded to the challenge without doing anything special.
He took his own approach, setting incremental and achievable goals, making contacts and securing the necessary support he needed and preparing for and experiencing all the physical effort these challenges demanded.  James's story makes it easy for an audience to believe that they too can achieve the extraordinary.
James is passionate about the places he has been to and the people he has met and talks with knowledge and affection of their lives, culture and beliefs and of the debt he owes them.
He is particularly grateful to the Sherpas who assisted him on Everest, as they were instrumental in helping him off the mountain when he succumbed to a severe lung infection on the descent.
The key message that James reveals is that we can all potentially set ourselves difficult goals and achieve them: the capability to succeed is within everyone. His practical and pragmatic lessons include the importance of interim goals, breaking the task down into small, achievable steps, each one of which increases the commitment to the overall goal; the need for self-belief; the willingness of others to help if only you dare to ask and finally, the value of persistence.
As he neared the summit of Everest, James learnt that the last few hundred metres are completed a mere ten steps at a time.  With hindsight, this has been the secret of his success and it is an approach that he also used whilst on his unsupported global cycle, travelling 18,000 miles on his bicycle, in just seven months.
Read More