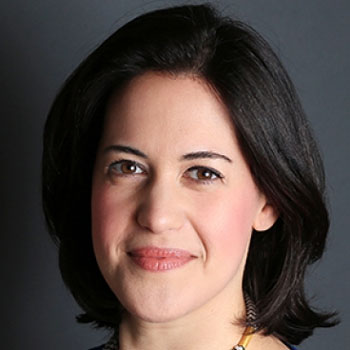 Jacky is passionate, enthusiastic and knowledgeable, her interests range from modernism to performance art, the history of the avant-garde to Renaissance Venetian art and architecture, the history of sex and gender to contemporary craft. She can give a brilliant talk for corporate events.

TV wise she co-presented ‘Britain’s Lost Masterpieces’ for BBC4 with Bendor Grosvenor in 2016, travelling the UK to discover some of the greatest lost paintings in our national collections. She has also contributed to BBC1 ‘Imagine’, BBC Radio's 'Front Row' and 'Free Thinking'. Also appeared as a contestant on both series of Griff Rhys Jones’s ‘Quizeum’ for BBC4, and been a talking head on a number of Bloomberg TV arts documentaries in the ‘Brilliant Ideas’ series.

Jacky has made films for the Art Fund, Tate, Heni Talks and more, and since 2016 has presented Christie’s Facebook Live broadcasts, previewing major sales from their London auction house.

Jacky can give specialist talks for corporate events on the following topics:

What Makes a Masterpiece?
Picking a handful of the world's most popular artworks (eg the Mona Lisa, Botticelli's Birth of Venus, Monet's Waterlilies, Van Gogh's Starry Night) we explore what ingredients elevate a work to become a masterpiece? Are there consistent elements that give one artwork the stature of ‘masterpiece’ over another? Why - fascinatingly - do works of the same technical or emotional power as others often not capture the public imagination? And if we can understand the elements that make a masterpiece, might we be able to predict the next one?

What is Contemporary Art?
Demystifying contemporary art for all those who find it challenging, strange or just downright silly - tracing a line all the way back to the Impressionists to tell a brilliant story about how we got to where we are today...

The Art World: An Insider’s Guide
Revealing the complex art world as a fascinating microcosm: a global network of subcultures with its own rules, rituals and customs. Ranging from museums to commercial galleries, public art to the auction houses, curators to collectors - this talk gives the inside scoop on the art world's key institutions, activities and players...

The Greatest Rivalries in History

Fierce professional rivalries and bitter competition can be frustrating, even dangerous - but they have also fuelled some of the greatest works on art on earth. How did the great tussles between Leonardo and Michelangelo, Turner and Constable, Van Gogh and Gauguin, and Matisse and Picasso drive forward their revolutionary art? Who were the victors - and why has it so often been the greatest artists who've had the most acrimonious battles?

Public Art: Beauty or Blight?
A fresh look at public art – its successes and failures, battles and controversies – on the eve of the 20th anniversary of Antony Gormley’s monolithic Angel of the North (Feb 2018), uncovering the decision-makers and rebels, the artists, architects and town planners – and of course the art itself, that reflects (or should do) our changing world, and even ourselves.

Light and Dark in Art
We've long known how important colour, design and subject matter are to art – its basic building blocks. But there have always been two other powerful forces at work, affecting almost every work of art ever made: light and dark. From the candlelight used to view early cave art to the beginnings of electricity in the 19th century and up to the light art of today (video art, light/kinetic, computer/screen-based); from Rembrandt and Goya’s depictions of darkness to Manet’s obsession with the colour black – we look at how the forces of dark and light have shaped our art and our history.


Tapestry, Taste and Teddy Bears: Uncovering the World of Grayson Perry
Grayson Perry – unconventional, media-savvy and craft-obsessed – has risen in recent years from being a controversial outsider figure to an artist at the very heart of the establishment. Now a Royal Academician and CBE, his artistic obsessions have however remained remarkably consistent ever since his student days as a squatter in London. In this talk, I look at some of those recurring themes including taste and class, sex and gender, beauty, and the inner life of the mind.