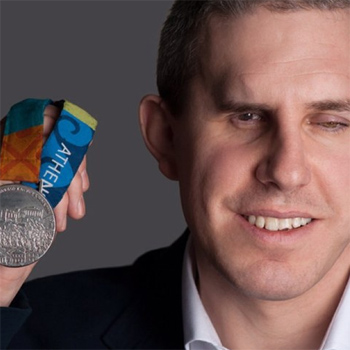 Torchbearer for the London 2012 Paralympic Games, winner of two Paralympic, five World Championship and nine European Championship medals, Ian is one of Great Britain's most successful Paralympic Judoka.
Retiring in 2011, Ian was on course to represent TeamGB at his 6th Games in London, but after rupturing his ACL (Anterior Cruciate Ligament) in training, Ian called it a day, bringing to an end an International career spanning 22 years at the top. Ian now focuses on motivating and inspiring others to achieve their full potential.

Ian's sporting and work achievements are a benchmark for sales, marketing and management teams. His world class success follows childhood cancer which left him disabled. Typically, he regarded it as a challenge. His positive nature and zest for life helped him reach for sporting stardom. The same positive approach and sense of fun helped him set strong goals and reach for the top in IT sales.

After taking up Judo for self defence, he swiftly changed from being a shy seven year-old who was teased about his thick glasses into a world-class Paralympic champion. His story is unique because he reached the pinnacle of sports success while building up a successful career. Ian enjoys sport but he is foremost a dedicated family man, with two children and a very supportive wife - the perfect team.

In sport he gained his black belt at 17. In the same year, (1989) he was selected to fight his first Visually Impaired (VI) European Championships, winning bronze. From that point Judo became a way of life. He succeeded in both fully sighted and VI competitions and has been selected for four Paralympics.

Sports motivation helped Ian forge a ten year sales career where he became skilled at proactive and reactive sales. Working for such organisations as ACER, Edify and TIS, Ian has successfully opened opportunities in markets where others have failed. He has the will to win in sport and at work. Success is his goal in life.

Ian's corporate presentation, which lasts between 20 minutes and 1 hour, covers:

1. The importance of building good communication, understanding and self-belief within teams.

2. Resilience and focus in tough times always wins through.

3. Adapting to change and effective goal setting is vital in today's business climate.

Ian's workshop, which is more individual, will:

1. Look at challenges faced on a personal level and how to overcome them.

2. Highlight the impact of your position in your personal and company team, and look at team dynamics and how actions effect others.

3. Explore good communication skills using blindfolds, to illustrate the importance of how you talk to others and what sort of reaction you receive.

4. Highlight how empathy in business is important and understanding that everyone has different strengths and weaknesses.

5. Look at good goal setting and explore your dreams both in and out of work.

6. Show how small steps make a big difference and make a massive impact in life.

Thank you so much for coming to SHILLING's challenge day and delivering the perfect motivational speech to end our day. Your relaxed way of speaking with just the right blend of humour and participation captivated the team and took us on the journey with you through the highs and (few) lows of your life. The link you made between your career as a sportsman the development, dedication and lessons learnt and everyday business really struck a chord with the team and I've had  many of them come to me and say how much they enjoyed your talk. You've also raised the bar for us to step up the way we try and inspire them to success. No pressure then!  Shilling Communication Director

Thank you so, so, so very much for inspiring us all at Holy Trinity on Tuesday. The children and staff were brimming with enthusiasm and full of praise for how wonderful and inspirational you were. I have had several parents who sought me out to express how much they had enjoyed the assembly and to pass on their huge gratitude to you. So, from HT, a HUGE thank you!  Holy Trinity Primary School Deputy Head

After meeting with Ian, I was impressed with his approach and asked him to work with our senior squad. Ian delivered a couple of sessions to the Wasps squad. The session consisted of a practical judo session followed by a motivation talk. Both sessions were thoroughly prepared to suit our needs. The players responded well to both sessions and Ian made a very positive impression on us all.  Tony Hanks Director of Rugby