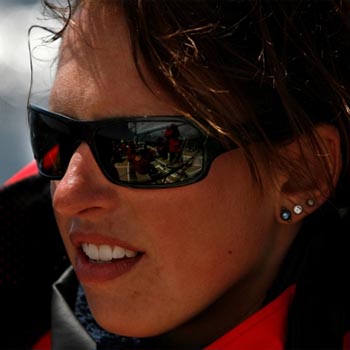 Hannah Jenner has already made a big impression on the sailing world. In July 2008, aged 28, she became the first female to skipper in the Clipper Round the World Yacht Race, gaining a podium position overall.   She had guided a team of amateur sailors around the world battling ferocious storms, 60ft seas during months of intense racing.  But their most proud moment came not from the podium results but from saving a crew member's life after he fell overboard in the Southern Indian Ocean in the pitch black and slipped out of his life jacket.
After returning from this race, Hannah spoke to many audiences from a large pharmaceuticals company to RAF fighter pilots to the staff at a whisky distillery on the subjects of managing change, motivating a team during tough times and dealing with conflict and crisis.
Hannah is extremely passionate about ocean racing and has been since her first trip across the Atlantic in 2005. Her determination, courage and absolute refusal to give up has produced some impressive results. Hannah counts rescuing a man over board in the Southern Indian Ocean at night, and bringing her Clipper team home in 3rd place overall amongst the greatest achievements of her life so far.

Not one to rest on her laurels, Hannah set herself the challenge of running the 2009 New York marathon - a gruelling feat at the best of times and even more so when you have just 4 months for training.  Hannah and best friend Lisa completed the 26.2 mile run in 5 hours.

Hannah's goal is to use her own skills and experience from 8 years of professional sailing to train and develop others whether out on the water or shore side as a motivational speaker.  Hannah's GLOBAL OCEAN RACE campaign will draw on these key skills and aims to bring a fresh new audience to sailing, just in time for the London 2012 Olympics.
An engaging speaker with a flare for public speaking, Hannah has delivered countless motivational, inspirational and after dinner speeches encompassing tales of drama on the high seas and detailing her grit and determination to succeed.
Read More