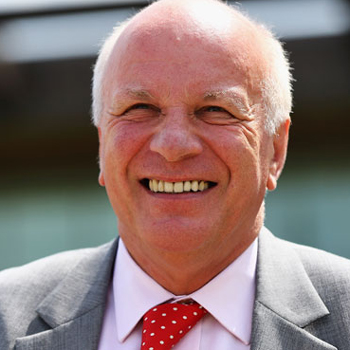 Greg Dyke was the BBC Director General from November 1999 until March 2003 when he left following the publication of the controversial Hutton report.

Greg was appointed Editor-in Chief at breakfast television station TV-am in 1983 and in 1984 joined TVS (Television South) as Director of Programmes. He rejoined LWT in 1987 as Director of Programmes and was a Director of Channel Four Television from 1988 to 1990. On 1 March 1990 he became LWT's Managing Director and in 1991 Group Chief Executive. From 1990 to 1992 he was a non-executive Director of ITN (Independent Television News). In January 1992 Greg Dyke became Chairman of the ITVA Council, a post he held for two years. He was Chairman of the new breakfast television station, GMTV, 1993-1994.

Greg became Chairman and Chief Executive of Pearson Television in January 1995 and an Executive Director of Pearson Plc in March 1996. He left Pearson on September 17th 1999. The company already owned Thames Television and under Greg Dyke's leadership it acquired Grundy Worldwide, US company ACI and SelecTV and the US producer All American Communications.

At the end of October 1995 a consortium guided by Greg was awarded the licence for Channel 5, Britain's last terrestrial commercial television licence. He was appointed Chairman of Channel 5 on 21 February 1997. Also in 1997 he was asked to review the Patients' Charter of the National Health Service.

Greg's interests include sport. He was Chairman of ITV Sport 1988-92, and in 1995/1996 presented Fair Game, an investigative series about sport for Channel Four Television. He was a member of the Manchester United Board from 1997-99, is a Trustee of the Science Museum and a Fellow of the Royal Television Society.

Greg Dyke and his partner live in Twickenham, Middlesex. They have two boys and two girls.