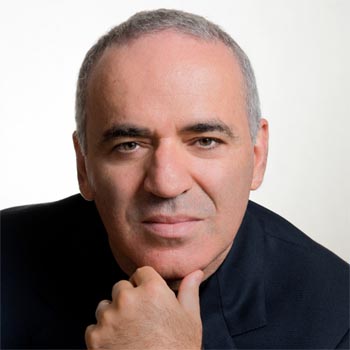 Born in Azerbaijan in 1963, Garry Kasparov became the under-18 chess champion of the USSR at the age of 12, and the world under-21 champion at 16. He came to international fame as the youngest world chess champion in history in 1985, aged 22.  He defended his title five times, including the legendary series against his arch-rival Anatoly Karpov.  He broke Bobby Fischer‘s chess record in 1990 and his own record remained unbroken until 2013.
Kasparov‘s outspoken personality did not endear him to the Soviet authorities, and from 1989 to 1991 his opposition to the Soviet system was vigorous.  It came as a shock when he abruptly retired from competitive chess in 2005 to join the Russian pro-democracy movement. He founded the United Civil Front and organised the Marches of Dissent to protest against Putin‘s policies. In 2012 he was elected to the Co-ordinating Council of the united opposition movement as well as being appointed chairman of the New York based Human Rights Foundation.
His US-based Kasparov Chess Foundation promotes the teaching of chess around the world and he  frequently travels to promote the benefits of chess in education and the need for more dynamic and computer-connected methods of teaching in both the developed and the developing worlds.
Innovation and technology are centrepiece themes in his lectures and writings and he has researched and collaborated with many high-tech visionaries and companies on human-machine co-operation, the economic consequences of tech stagnation, and the future of intelligent machines.
He has been a contributing editor to The Wall Street Journal since 1991 and is a frequent commentator on politics and human rights.  He speaks frequently to business audiences worldwide, on innovation, strategy and peak mental performance.  Kasparov‘s book on decision making How Life Imitates Chess is published in over 20 languages and he is also the author of the chess books My Great Predecessors and Modern Chess.
He lives in New York.
Read More