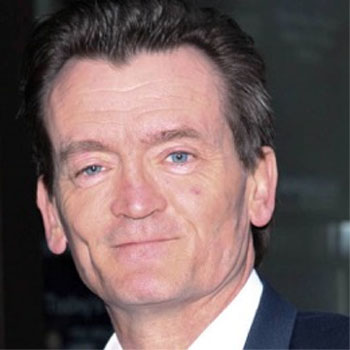 Shortly after leaving school a promising career delivering televisions for Radio Rentals was rudely interrupted by a request from the BBC for “The Undertones,” to perform their first single “Teenage Kicks,” live on “Top of the Pops.” Never one to shirk difficult decisions he informed his superiors that he was just popping-out for lunch; they still keenly await his return.

There followed a hectic period of some twelve years, world tours, hit albums, late nights and bad food in transport cafes spanning most of the UK’s motorway network. All of this activity culminating in a successful solo career and the release of “A Good Heart,” a world-wide number 1.

The early Nineties brought a new beginning and a post-match transfer to the administration side of the industry, initially as A&R Manager for Polydor Records, more late nights in transport cafes, and then as Managing Director of EXP Ltd.

In 1998 Feargal was appointed Member of the Radio Authority by the Secretary of State serving a full 5 year term until 2003 followed immediately by an appointment as Chair of the Live Music Forum Feargal established by government to monitor and evaluate the impact of the Licensing Act 2003 upon the performance of live music.

In 2008 he became CEO of British Music Rights and rapidly evolved the organisation into UK Music; the only organisation of its kind in the world representing the collective interests of the British music industry. While at UK Music Feargal helped oversee the introduction of the Digital Economy Act, the Live Music Act, the extension of copyright term in sound recordings and the establishment of the Creative Industries Council.

As a result Feargal has been the recipient of multiple awards including the ‘Scott Piering Award’ in recognition of his achievement in the promotion and understanding of the music industry to colleagues in radio, the ‘Bottle Award’ for his outstanding contribution to the live music industry and has also featured in The Media Guardian Top 100 most powerful people in TV, radio, newspapers, magazines and digital media.

He delivers talks about the business of music, past and present, and how the industry has had to adapt and evolve to the many challenges from new technology. He argues, in this era of downloads and streaming, the technology may have changed, but the basic principles remain the same and the importance of record companies continue. The UK remains the 2nd biggest producer of music in the world, and is a huge contributor the UK economy as a net exporter.

As a fly-fisherman, Feargal is also a keen environmentalist and has even taken on the Environment Agency as part of his campaign to clean up England’s chalk streams. His hard-earned negotiating skills from the music industry are being put to good effect! He argues that we cannot allow the destruction of 85% of the world’s chalk streams, which all happen to be in England. They are the equivalent of our Amazon rainforest and we must do something to save them.

In the Queen's 2019 birthday honours list he was awarded an OBE for services to music.

He was amazing!!! So brilliant.  He was great with the guests from the time he arrived to the time he went home.

"His speech was well delivered and well researched - he pitched it to our guests perfectly.  I would highly recommend him as a speaker, he really was superb and he's a lovely man too."