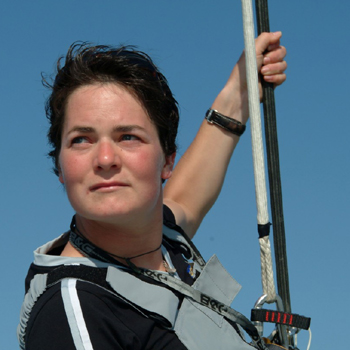 The Vendée Globe is the toughest challenge the oceans have to offer: competitors are alone at sea, circumnavigating the globe. Ellen captured the public's attention on her first attempt as she battled against the elements and equipment failures for 94 days, finishing second and becoming the youngest person ever to have achieved the feat.
As a schoolgirl Ellen saved her dinner money to buy her first boat, an 8ft dinghy. By the time she was 18 she owned a 21ft pocket cruiser and took it around Britain solo. That year she was named Young Sailor of the Year.
Ellen asked thousands of companies for sponsorship, but received only two replies. Undaunted, she moved to France and promptly won the Mini-Transat race from Brest to Martinique. This brought her the funding to compete in the Route du Rhum, where she came home first in her class despite having a shattered running board. Ellen was acclaimed in the French press as 'la jeune espoire de la voile' - sailing's young hope. They called her the greatest English sailor since Nelson.
It hasn't always been straightforward. When skippering a 14-strong crew in the Jules Verne Trophy, Ellen was forced to withdraw when the mast broke. But her spirit was undiminished; the next year she set a new solo non-stop round the world record. The journey had been completed only once in a multihull, in 73 days. She completed the course with a day to spare.
Read More