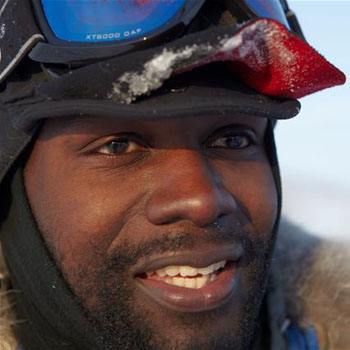 In 2010, Dwayne Fields was the first young black Briton to walk 370 miles to reach the North Pole.  Now he is setting his sights on the South Pole
Born in Jamaica, Dwayne grew up in the UK from the age of six. He has been the victim of both knife and gun crime and as a result of his experiences of the effects of gangs and crime, he decided to change his life. He has become an adventurer/explorer; is studying on a combined honours degree in Psychology and Third World Studies; he is an ambassador for his university (UEL); and gives motivational talks to young people on his exploits.
In 2007, Dwayne completed the Three Peaks Challenge, to climb the highest peaks of
England (Scafell Pike), Scotland (Ben Nevis) and Wales (Mount Snowdon) within 24 hours.
He successfully completed the 2010 Chara challenge, a demanding thirty mile cross-country race across Dartmoor, carrying 32 pounds of weight. crossing the finish line in twelfth place.
In December 2011, he was invited to Buckingham Palace, joining other Polar
explorers, adventurers and achievers at a reception to mark the  centenary of Scott‘s expedition to the South Pole.
He has been interviewed about his exploits on ITV1, London Tonight, BBC, Choice FM, Metro Newspaper and other news-based media; and has recently appeared on the
Daily Politics Show to be interviewed about his ˜manifesto‘ for getting more young people to engage positively with the countryside. (see Video). He has featured recently in the Independent and The Telegraph.
Dwayne‘s South Pole journey will take him: starting from Hercules Inlet across the Geographic South Pole, over a thousand kilometres away (730 miles). He will be negotiating crevasses, crossing snow bridges and making an ascent from Sea Level to approximately 3,330 meters near the South Pole. With katabatic winds up to 80mph, temperatures as low as -40C, and the threat of blinding snowstorms, this is the ultimate extreme endurance test set in the stunning landscape of one of the coldest, and highest ˜deserts ˜on the planet.
Read More