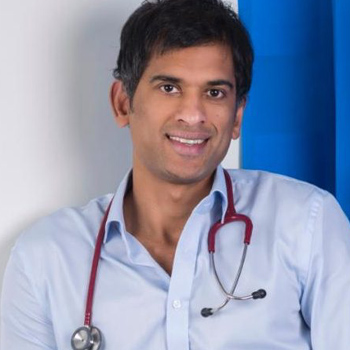 Dr Chatterjee grew up in a medical family – his late father, Dr Tarun Chatterjee, was a consultant in genito-urinary medicine at Manchester Royal Infirmary – and he studied at the University of Edinburgh Medical School, graduating in 2001 with an additional degree in immunology.

A career in renal medicine was his intention, but after initial medical rotations in Scotland, he returned to Manchester in 2003 to help look after his father, who was seriously ill with lupus and kidney failure. ''By that time I had done all the crazy emergency room shifts, and sat some of my exams, but I was becoming very frustrated at how super-specialist medicine was. I felt the role of generalist was undervalued.

As a doctor, I wasn’t really seeing the whole person.’’ He moved to general practice and found his beliefs put to the test at once: ''On my first day I saw a young woman with depression. My guidance suggested that I should prescribe anti-depressants, but I felt that this was wrong. She needed to talk.’’ He saw the patient twice a week and let her talk while he simply listened. And we got her better. I haven’t forgotten the value of that human connection.

Studies suggest you can’t teach a good bedside manner. But if you can connect with patients, build a rapport with them, you get better outcomes.” Not that Dr Chatterjee doesn’t value mainstream medicine or drugs in context. Acute medicine gave me 15 extra years with my father, as well as saving my son. But I believe GPs need to learn more about a functional medicine approach, as well as nutritional science. We don’t get taught this stuff at medical school and we don’t know how to engage people in behavioural change.”