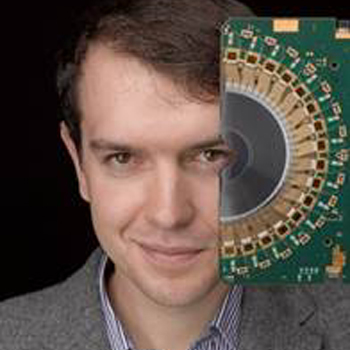 Harry Cliff is a young physicist who splits his time between researching cutting-edge particle physics at Cambridge and CERN, and communicating the mysteries of fundamental physics at London’s Science Museum.

As the first Science Museum fellow, Harry is the curator of Collider, the first in a new series of blockbuster exhibitions centred on the greatest scientific endeavour of the modern age – the Large Hadron Collider.

Harry’s immersive exhibition has won critical praise after opening in November 2013. He worked with a team drawn from theatre, museums, and design to transport visitors to CERN, conveying the thrill and drama of working on an experiment that is changing the way we think about the Universe. The exhibition is on tour in the UK and internationally.

For Harry, his job is a bit of a dream come true - He spends half his time searching for signs of new physics at LHCb, one of the four big experiments at CERN's Large Hadron Collider. For the rest of the week he getsto indulge his love of talking about physics at the Science Museum. He currently holds a joint fellowship between the Cavendish Lab at the University of Cambridge and the Science Museum. Officially he's the 'Science Museum Fellow of Modern Science', which he thinks might be the only job title which begins and ends with the word 'science'!

Dr Harry Cliff has given talks to: