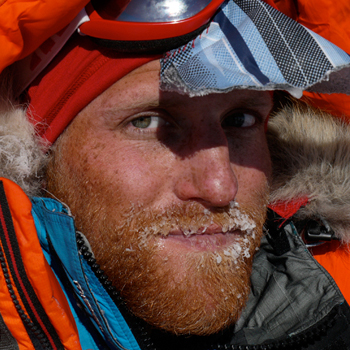 Dr Ed Coats was chosen to join James Cracknell and Ben Fogle on the race to the South Pole in 2009. The race was the first of its kind since Captain Robert Scott was beaten by Norwegian Roald Amundsen in 1912.
Ed completed a two-day selection course and aptitude test to win his place on the expedition team, beating over 650 applicants from across the UK.
Six teams from around the world took part in the race. Ed, James and Ben, also know as 'Team QinetiQ', skied for 473.6 miles across Antarctica. The trio, who had little cross-country skiing and no polar experience between them prior to the race, skied for 16 hours a day in temperatures as low as -50 degrees Celsius, while pulling 70kg pulks behind them. The team crossed treacherous crevasse fields while battling blisters, frostbite, hallucinations and pneumonia to finish only 18 hours behind their Norwegian rivals, and cross the finish line in second place.
The trip was followed closely by the Daily Telegraph and BBC Breakfast and was filmed for the primetime BBC2 documentary series, 'On Thin Ice'.
Prior to the South Pole Race, this intrepid doctor was no stranger to physical hardship. His achievements include representing Great Britain as a decathlete, swimming the English Channel with two teams and completing various adventure races including the Original Mountain Marathon.
Ed is a doctor of Obstetrics & Gynaecology in a busy Maternity Unit in Bristol. He has degrees in Medicine and Human & Aerospace Physiology from the University of London and has completed a Medical Law degree alongside his day job. He has a keen interest in research and it's application to clinical medicine.
Over the years Ed has been part of a wide variety of teams and understands the importance of teamwork. He has an interest in the psychology of teams, team dynamics and leadership styles.
Ed now delivers motivational and inspirational talks and is developing his corporate speaking work.
He keeps fit by running, swimming and road biking and in 2010 took on a series of challenges as he turned 30,  testing his body with the '30 at 30 Challenge'.
"Ed was excellent his presentation was interesting and thought provoking, he included some comments which were pertinent to the client/event, and in addition to all this, he is such a nice guy to work with which, for event organisers, is a real bonus! I would have no hesitation in recommending him."  Talisman Scholarship Awards for Mearns & Gill - November 2012
Read More