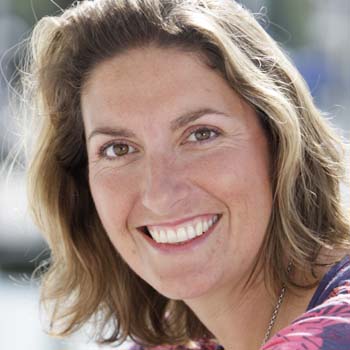 Yachtswoman Dee Caffari has sailed into the record books " six times.  On 18 May 2006, Dee became the first woman to circumnavigate the world solo 'the wrong way' (against the prevailing winds and currents).  It is an extraordinary achievement. Only four men have ever managed to finish this gruelling route before: more people have walked on the moon.  In recognition of her first world record, Dee was awarded an MBE in the Queen's Birthday honours list.

Not one to stay in her comfort zone, Dee launched a campaign for a new world record just months after her first solo circumnavigation.  Dee announced that she wanted to become the first woman to sail solo, non-stop around the world in both directions. In order to do this Dee entered the highly competitive world of Open 60 racing.   Dee faced a daunting task.  She aimed to compete against the best international sailors in a race held every four years 'the right way' around the world.  After one of the most dramatic Vendée Globes ever known (2008/09) " it is not called 'The Everest of the Seas' for nothing - Dee finished on the 16 February 2009 and claimed a double world-first.
Dee led ‘Turn the Tide on Plastic’ – the first mixed gender youth team to compete in the Volvo Ocean Race 2017/18; with a strong sustainability message. Off the water, the issue of single use plastic in our oceans gained huge momentum and has inspired many people to take action in their day to day lives. Dee will continue to highlight the vital importance of reducing our dependence on plastics.
With a passion for sport and exercise, Dee is an Ambassador for Active Southampton promoting 30 minutes of exercise a day. Her keen interest in health and life-balance stems from her roots as a secondary school PE teacher.  A strong desire to face and overcome challenges has led Dee into adventures outside the sailing environment too. One such challenge was leading a female team over 6500km of rugged terrain in the Mark Webber Pure Tasmania Challenge.  The focus was to raise money for cancer charities and Dee has since become the Patron for the charity Sail4Cancer.  A love of the ocean and the British coastline has seen Dee become an Ambassador for the RYA Green Blue Campaign to help everyone reduce, re-use and recycle.

Without doubt, one of Britain's most inspirational women, Dee is now an acclaimed international speaker and she tells her dramatic and highly motivational story with great grace, humour and insight.  Her autobiography 'Against the Flow' was published in paperback and is available in French, Italian and German.
'Dee is a natural presenter and what comes over so strongly is her enthusiasm, excitement and her ability to articulate her story so well and to engage with an audience. No arrogance, a good sense of humour and great style.' Nationwide
'Dee's presentation is so relevant to today's business environment. A fantastic lady! A very down-to-earth pragmatic person who has overcome a huge personal challenge to achieve the impossible: her passion is tangible. The Q&A session was particularly good as what she learnt really came to life.' Royal Bank of Scotland
'Dee's presentation resonated strongly as she gave the highs and lows of her story - the emotional journey. There were strong parallels with the business world that I could relate to - how I can overcome challenges, for example. Her personality is warm, open, honest. The video was very powerful.' John Lewis
'Not everyone can win. What they need is a number of skills and qualities to do this. Dee Caffari is gregarious, which is important because a crew wants to know where it stands. She also has a lot of empathy with her crew"¦ Dee has tremendous qualities and she does invoke confidence, not just in herself but in everyone around her.' Sir Chay Blyth
'I am full of admiration for Dee"¦ The main thing is she had a dream, went for it, and has succeeded.  There is no such thing as failure, only those people who fail to follow their dream.'  David Hempleman-Adams
Read More