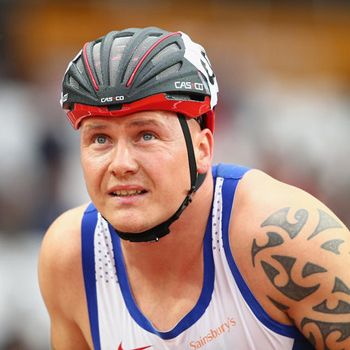 David Weir won 4 Gold Medals at the London 2012 Paralympic Games in the 5000m and 1500m, 800m and the marathon and is considered by many to be one of the best wheelchair athletes in the world.

He won 4 medals (including 2 Gold medals) at the 2008 Paralympic Games, which was his third Games, and previous won Silver at the Athens Games in 2004.

David Weir is the current British record holder of the distances up to 5,000 metres as well as the road at 10 km, half marathon and marathons. He an MBE in the 2009 New Year Honours.

In 2010 he was inducted into the London Youth Games Hall of Fame and later became the patron of the event in 2012.  He was awarded a CBE in the 2013 New Year Honours List.

"It was a real pleasure to have David with us. Please pass on our thanks. The Q & A went very well and David kindly had lunch with some of our delegates."  David was guest celebrity at the Yorkshire International Business Convention - June 2013