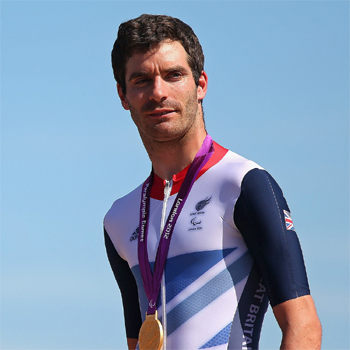 Paralympic cyclist David Stone specialises in road races and time trials and has won Gold Medals in both events at Paralympic and World Championship level. In 2009, following the Beijing Paralympics, he was awarded an MBE.
He won Gold at the London 2012 Paralympics in the T 1-2 road race and Bronze in the T 1-2 time trial.
David suffers from cerebral palsy but has described cycling as an outlet of frustration, as well as a source of freedom and enjoyment.
His journey to winning medals began through wanting to win a girl's heart when he was nine years old and has taken him across the world, both on and off the bike, from Pakistan in the aftermath of 9/11 to a year in India and riding stage races in Norway.
Bike racing really began for him in 1995 when he made his first international debut in 1996 at a World Championships in Nottingham. At first his results were mediocre but the potential was there.
Whilst undertaking a Social Work degree in 2003 he took to riding his bike again and his competitive instinct re-emerged. He rode the National Time Trial Championships in 2003, and took part in competitions in America where he won his first World Championships with fellow team mates, Darren Kenny and Rik Waddon on the track in the team sprint. Then he took on the Paralympics.
However, he had never wanted to be just another bike rider.  Having Cerebral Palsy and a rebellious streak at times, his journey has been unconventional, yet fruitful and it's a story he is keen to tell.
He has spoken in Europe and further afield, he has a wealth of experience with audiences.  David is comfortable talking at broad range of events and has the ability to articulate his story of overcoming many challenges, with his audience often brought to both laughter and tears.
Many people have told him that he is the most inspirational person they have ever met.
Read More