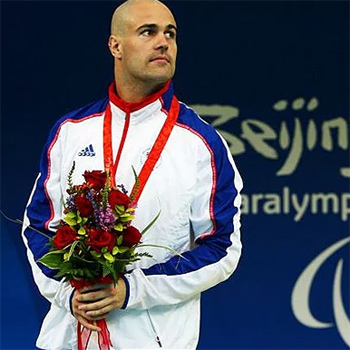 David Roberts CBE is the greatest male Paralympian the UK has ever produced. His gold medal tally equals that of Dame Tanni Grey-Thompson and Sarah Storey, a joint record for the most Paralympic titles ever won by a British athlete.
He was diagnosed with cerebral palsy at the age of eleven and was encouraged to participate in swimming activities as a form of physical therapy. He is now a professional disabled swimmer who represents Caerphilly County Swim Squad, Wales and Great Britain.
Dave first represented Wales aged 13 with his first major competition for Great Britain in the 1999 European Disabled swimming Championships in Germany where he won all four of his races. His International Paralympic Committee (IPC) swimming category is S7 SB7 SM7.
David took part in the 2000 Sydney Paralympics and become an instant hit, winning three golds, three silvers and one bronze medal. He competed at the 2004 Athens games, winning four gold medals in the 50m, 100m, 400m and the 4 x 100 metres relay, and went on to win a silver in the 200 metre individual medley.
His achievements at the 2000 and 2004 Paralympics, along with his previous successes for GB, earned David a MBE for his services to disabled sport and he received his award from the Queen at Buckingham Palace in March 2005. He was also shortlisted in the 2004 BBC Wales Sports Personality of the Year Award which was won by Dame Tanni Grey-Thompson.
David won four golds at the Beijing 2008 Paralympics taking the S7 50 m, 100 m and 400 m freestyle events and was part of the gold medal winning Great Britain 34 point 4Ã—100 m freestyle relay team that broke the world record by seven seconds.
David was selected to carry out the British flag at the closing ceremony. He was nominated for the BBC Wales Sports Personality of the Year Awards for the second time in December 2008.
In the 2009 New Year Honours David was appointed Commander of the Order of the British Empire (CBE) and received his CBE from Princess Anne at Buckingham Palace on 24 June 2009.
David was inducted into the Welsh Sports Hall of Fame in June 2009.
As a public speaker, David is unrivalled in his experiences, rising from a local swimmer to one of the greatest Paralympians of all time.  His stories of all the struggles he has overcome throughout his career are truly inspiring and prove to be a great motivator to all those listening.
He has given speeches for organisations including Jaguar Landrover Group, Lloyds Bank and has addressed the Human Rights Council in Geneva on London 2012 and the rights of people with disabilities.
Read More