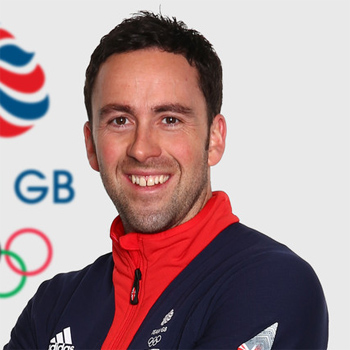 David Murdoch is a curler from Lockerbie, three-time Winter Olympian and Sochi Winter Olympic 2014 silver medallist.  His 12 sensational curling matches as skip of the Team GB men at Sochi saw his last stones win crucial games to famously include a vital play off against Norway. His crucial shot was dubbed by national press as 'shot of the century' to make the semi finals. Then his equally brilliant last shot against Sweden secured the Olympic silver medal.  The win was the first for Team GB men's curling since the 1924 games.
David is a 2 x World Champion, 3 x European Champion, with 4th and 5th places in his first two Olympics.
Curling is in his family. His mum and dad, brother and sister all play the game to a high level. Sadly David's dad,  a 3 x national curling champion, died just 12 days after David's triumphant return from Sochi.
David and his dad witnessed the tragic Lockerbie bombing in 1988. They were in a car just a few roads away when Pan AM flight 103 crashed and David has vivid recollections of the tragic day in his home town's history.
As a commentator David has taken part in studio analysis on curling for Eurosport for many years, and for Channel 4 for the 2014 Paralympics. He has appeared  TV & radio shows including: A Question of Sport, Eggheads, Sport Relief 2014, Daybreak, The Alan Titchmarsh Show, Sky Sports, Sky 1's Game Changers, BT Sport's Panel with Tim Lovejoy and Matt Dawson, BBC Radio 2 with Anneka Rice, BBC 5live, Talksport.  As a lottery funded athlete, he has also had the pleasure to officially release the National Lottery draw to 10 million viewers.
David regularly visiting Canada, USA, Switzerland, Germany and Scandinavia for his sport. He is a full time professional athlete, a proud, humble, dedicated pro and is widely acknowledged as one of the world's top curlers. He is a brilliant speaker on his life and sports career.
Read More