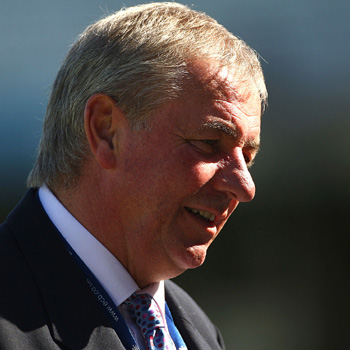 David Graveney is recognised as the secret power behind the 2006 Ashes success and has prospered both on and off the field.

Before joining Gloucestershire County Cricket Club, David embarked upon an accounting career and, until he took up his position with the Professional Cricketers Association in 1983, he continued on a regular basis as a self-employed accountant.

As a good slow left-arm bowler, he played for Gloucestershire from 1972 to 1990 (6 years as Captain), for Somerset in 1991 and for Durham for three years after that (being Captain for 2 of them). He represented the England under 25 team and played County Cricket for 22 successive years.

As long ago as 1975, he had been elected Gloucestershire representative to the P.C.A. Executive Committee, right up to 1983 when he was appointed as P.C.A. Treasurer. He became that organisation's Secretary in 1992 and Chief Executive in 1994.

During his term of office with the P.C.A. he played his part in helping to improve the lot of cricketers, including the establishment of pension plans, a minimum wage and health trust. He stood down from the Committee in 2002.

He managed an unofficial tour to South Africa in 1990, became a National Selector in 1995 and Chairman in 1997, up to 1999 also managing England Teams in various countries around the world. He is currently still Chairman of Selectors, Vice President to the P.C.A. and F.I.C.A. (Federation of International Cricketers Association) while still serving on numerous English Cricket Board Committees.

In the corporate market, David talks about turning English Cricket around. Drawing on parallels between cricket and business, he explains how cricket has gone from being the poor relation of English sport, to challenging football for the affections of the nation and transformed the fortunes of club, country and players.