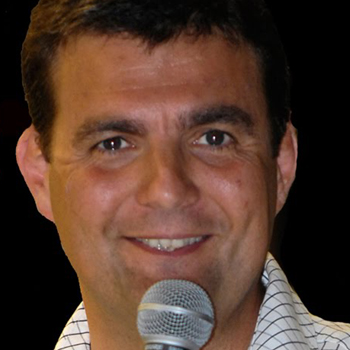 David Bryon is the former Managing Director of bmibaby, which grew to be one of the Europe's largest low cost airlines under his leadership. He now enjoys a successful media career that includes a highly popular after-dinner comedy routine (based around flying), professional business speaking, awards evening host, conference facilitator, and TV presenting.
He is a regular guest on various national programmes including Radio Five Live, BBC Radio 2, BBC News 24, and Sky News. He has worked with Accenture, Barclays Bank, BP, Sun MicroSystems, the FA, Chevron, Deutsche Bank, and the Kuwait National Government.
Born and raised in the SE of England, Dave completed a degree and PhD in Geology at the University of Liverpool before becoming involved with the early evolution of the internet and ecommerce. He moved to America in 1996 and continued to work in ecommerce.  He also started writing a humorous newspaper column looking at life in America through the eyes of a cynical Englishman. This became very successful and also led to Dave hosting his own TV talk show.
Dave returned to the UK in 2000 to take-up a position with the airline bmi, and was part of the senior management team that set-up the low cost carrier bmibaby in 2002. He was Commercial Director for 18 months before being appointed Managing Director. bmibaby reached a peak of 4.5m passengers per year and an annual turnover in excess of £200m. It was sold to IAG (British Airways) in 2012 along with the parent company (bmi).
"Excellent performance from David. A good balance of humour and business messages, which went down really well with all of our attendees. Very positive, and the humour was right on the button; kept it clean but entertaining!" The Lavendon Group
Read More