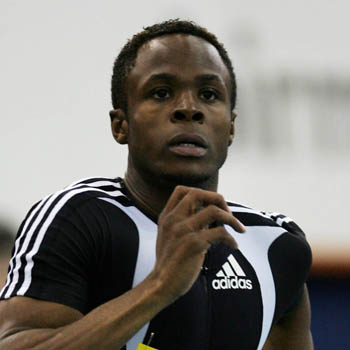 Daniel Caines is a highly accomplished professional athlete and motivational and inspirational speaker.

He won World, European and Commonwealth titles, individually and as part of relay team and competed in 2 Olympics, before retiring after the Europa Cup in 2007 in Munich.
His medals include:
World Silver Medalist 400m
European Bronze Medalist
European & Commonwealth Games relay Gold Medals
Daniel comes from a family with a fine sporting pedigree. His mother Blondelle Thompson set a British record at 13.0 for 100m hurdles in 1974 and ran for Britain in the European Championships that year and his father Joe Caines was a British junior international in 1970 - 1970.  However, Daniel's career almost never took off and hampered by injury, it looked as if he was destined never to achieve his dream and compete at the Olympics. He was to prove everyone wrong.

In 1998 Daniel was the fastest in the UK at Under 20 level but the night before the world junior trials he sprained his ankle but still made the team.

Whilst continuing to train, in 2000 Daniel graduated from the University of Swansea with a Law Degree.  Ranked 37th in the UK over 400m,  Daniel charged on the road to Sydney, reducing his personal best by 1.3 seconds and became British no.1 and no2. in Europe. He improved 18m in 6 weeks - a remarkable achievement - and finished 4th at the Sydney Olympics.

Daniel's message is of self-determination and the desire to succeed and he believes:

"Each day stars are found " so why could it not be you!
"Positivity breeds positivity " how those around you can make you more positive.
"The only things guaranteed in life are not only death and taxes! Setbacks will occur, but its not so much the setback but how you handle it that will determine the outcome.

Now a successful Business Development Director for an IFA Firm, Daniel still finds the time to deliver his messages to businesses and organisations across the UK

"He is a really nice guy, well spoken, well mannered and well presented. He spoke very well with a clear message to all students. He was amusing, concise and inspirational. He came early and stayed afterwards to speak to students and have photographs with them."  Daniel presented Key Stage 4 & 5 Awards at Shire Oak Academy
Daniel related very well to the clients and engaged them an interactive way, also handling questions very well. We had a lot of very positive feedback from the clients eg. Educational, really motivated me to keep trying again and again". He was very friendly & interested in what we do and was also good at including those with special needs"  Jericho Foundation
Read More