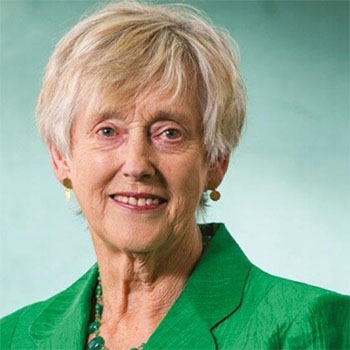 Dame Stella speaks about her life and career at a wide range of events for audiences worldwide: for major national and international corporate clients, business professionals, the public and private sectors, trades associations and schools. Her straightforward approach and friendly, candid manner are combined with an informed view and intelligent judgement.

A best-selling thriller writer, Dame Stella chaired the Judging Panel for the Booker Prize for Fiction in 2012.

The Moscow Sleepers, (the 10th in her Liz Carlyle thriller series), was published in 2018.

Dame Stella is known to billions of people worldwide as the role model for the character “M” played by Dame Judi Dench in the James Bond 007 films. It is rumoured that her own personal style, and choice of clothes, influenced the film character of “M”………who knows?!

Born in 1935, she was educated at Nottingham High School for Girls and Edinburgh University. After gaining a postgraduate diploma in the Study of Records and the Administration of Archives at Liverpool University, she worked in the Worcester County Record Office and the India Office Library, London.

In 1965 she accompanied her husband on a posting to the British High Commission in New Delhi. Whilst there, she worked part-time for the Security Service, which had an office in New Delhi at that time.

Returning to the UK in 1969, she joined the Security Service as a full-time employee. She worked in all the main fields of the Service's responsibilities - counter-subversion, counter-espionage and counter-terrorism - becoming successively Director of all three branches.

Made a Dame Commander of the Bath in the 1996 New Year Honours List, Dame Stella has Honorary Degrees from Universities including Nottingham, Warwick, Lucy Cavendish Cambridge and Exeter.

Edinburgh University elected her “Alumna of the Year 1994”.

Previously a Non-Executive Director of Marks & Spencer Plc, BG Group Plc, and an Associate Director of CPS, she was Chairman of the Institute of Cancer Research and Trustee of the Royal Marsden Hospital NHS Trust. Until 2001, Dame Stella was Honorary Air Commodore of 7006 (VR) Intelligence Squadron Royal Auxiliary Air Force and a Trustee of the RAF Museum.

A Governor of Town Close House Preparatory School in Norwich, she has two daughters and five grandchildren.

“Dame Stella was a real professional, easy to work with and she followed the brief perfectly. Our client is delighted.”

“A thought-provoking presentation for our Risk Division Leadership Meeting. All our attendees thoroughly enjoyed Dame Stella’s insight, and the challenges she faced remain relevant today. An excellent session and we have received really positive feedback: Dame Stella was the highlight of the day”

“I want to reiterate our comments on how much we enjoyed hearing and meeting Dame Stella. She has provoked such a positive response. We weren’t sure that our most recent speaker would be surpassed, in terms of engagement. Well, I’ve been proved wrong! Her message and observations have resonated very clearly with our colleagues at the firm – she offered a perfect fit of outlook and perspective."

“Dame Stella is exceptionally polished, very professional and inspiring. Her insight and knowledge are exceptional. We could have listened all day to her sharing her experiences. Many thanks to Diana Boulter from DBA for arranging for Dame Stella as our guest speaker.”