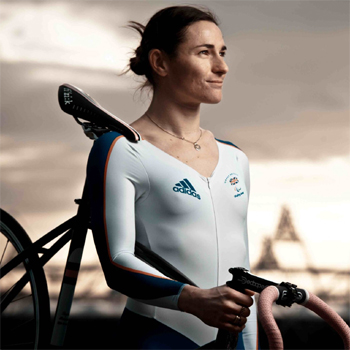 Sarah Storey is one of Great Britain's most decorated Paralympians after winning 11 golds, 8 silver and 3 bronze over 5 Paralympic Games. This includes 4 Golds at the London 2012 Games.

Her achievement is all the more remarkable by the fact she has won the medals in two different sports - swimming and cycling.

Up until 2005 she had competed as a swimmer, winning five gold medals but then switched sports and went on to win double gold as a cyclist in Beijing in 2008, followed by success at London 2012.

Sarah was also the first Paralympian to win an individual able-bodied national title, when she won gold in the 3,000m Individual Pursuit at the 2008 National Track Championships in Manchester. She successfully defended this title in 2009.

Sarah also did a unique double at both the World Road Championships and World Track Championships winning the Road Time Trial and Road Race, as well as the 3,000m Individual Pursuit and 500m Time Trial.  During the Track Championships, Sarah further lowered her own world record in the 3,000m to clock a time of 3.34.266, making her one of the top 5 female pursuiters in the world, regardless of disability.

Throughout her career, Sarah has broken a world record on no less than 70 occasions.

Sarah has been awarded many prestigious awards in recognition of her excellent results. These include the following highlights:

1992 Sunday Times Schoolgirl of the Year

Sarah is an experienced speaker at corporate events and business conferences. Her motivating style and enthusiastic approach uplifts every audience and with her insightful approach to life she never fails to leave anyone who listens to her excited and ready to get on with the job!  She is well informed and able to tailor presentations to suit the needs of the client, having the ability to interact with a wide range of people and is comfortable in any environment.  She also has extensive experience of media work and is a very popular speaker at schools both in the classroom and on the stage at academic or sporting awards evenings.

Sarah delivers stories from her sporting career and talks about the highs and lows of competing on an international stage. In a world where the smallest margins are the difference between winning and losing, she explains what it takes to push body and mind to their limits in order to achieve against the odds.

Sarah is married and lives in Manchester with her husband, fellow cyclist Barney Storey MBE.

Sarah received a DBE in the 2013 New Year Honours List.