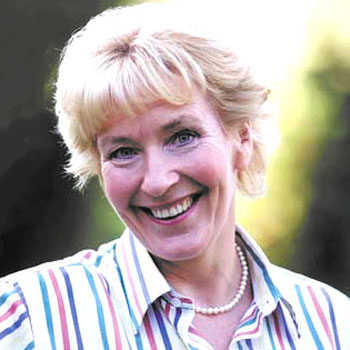 With more women like her Britain would never have lost the Empire." Lynda Lee Potter

Christine Hamilton appears regularly on TV and radio, on entertainment shows and on news and current affairs programmes. Her repertoire includes everything from "Have I Got News for You" and "The Big Breakfast" to "Any Questions" and "Newsnight". She also writes for various newspapers and magazines and was in the very first series of "I'm a Celebrity, Get Me Out of Here".

She has filled both Oxford and Cambridge Unions ("the best Presidential debate for years - you made it for everyone"), wowed the boys at Eton College ("you managed to make most of the audience cry with laughter") and enchanted countless other audiences with her wit, humour and fund of hilarious stories.

On her critically acclaimed BBC Choice series, "The Christine Hamilton Show" she proved herself a natural and perceptive interviewer, chatting to household names who have survived stormy waters of all kinds - from James Hewitt and Jonathan Aitken to Bernard Manning and Ivana Trump,

She is in demand to speak at luncheons, dinners and gatherings of all kinds, equally at home with male, female or mixed audiences, enlivening many a conference dinner with her charm and humour. A practised, entertaining and witty speaker, she lifts the veil on the discreet yet not-so-discreet World of Westminster and enthuses hilariously about her "Great British Battleaxes".

Christine acquired media celebrity overnight for the forceful support she gave her husband during his high profile 1997 General Election campaign in the Tatton constituency. The Battle of Knutsford Heath was one of the high spots of the campaign. Descriptions of her ranged from the insultingly unflattering to the admiringly adulatory. She was called everything from "The Wife from Hell" to "The Battling Lioness". Lampooned in countless articles and cartoons as a ferocious Battleaxe, she also aroused admiration in many quarters for her spirit and chutzpah.

Inspired by her own caricature, her first book "Christine Hamilton's Bumper Book of British Battleaxes" was published in October 1997 and is now out in paperback. Light-hearted and entertaining, it is a colourful cornucopia of 33 Belligerent British Belles who have enlivened the pages of history and, more recently, the headlines of the popular press. The Battleaxes range from Queens Boadicea to Victoria, from Nancy Astor to Margaret Thatcher; from Fanny Cradock to Bessie Braddock; from Joan Collins to Ena Sharples; from Cynthia Payne to Edwina Currie and from Barbara Cartland to Barbara Woodhouse. She is currently working on her second book, which will be autobiographical.

Game for anything ('as long as it is legal, honest and faintly decent') Christine has parachuted and posed as Eve (with Neil as Adam) for charity; dressed as a drag queen on the BBC, had cosmetic infill injections live on C5 & the BBC, and launched a death defying funfair ride. An outrageous flirt, who could forget her disarming Louis Theroux in their documentary, now considered one of the best television moments of 2001.

She spent her childhood in the New Forest area where her father was a GP in Ringwood. After graduating from the University of York she worked at the House of Commons for 26 years as research assistant and secretary to MPs, starting with the flamboyant Sir Gerald Nabarro (MP for South Worcestershire until he died in 1973). She worked for her husband from his election in 1983 until he lost his seat in 1997.

Christine and Neil live in Wiltshire and London where they enjoy music, gardening, cooking and entertaining, which encompasses their overriding passion: the company of good friends.