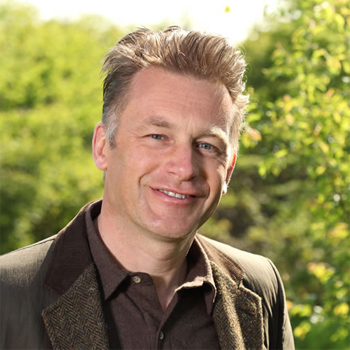 Chris was born in Southampton and from a very early age was fascinated by ladybirds, caterpillars and tadpoles. His menagerie expanded to include reptiles and birds of prey, foxes, badgers, squirrels etc. His bedroom walls were lined with tanks and he was soon keeping kestrels, barn owls, buzzards and a sparrowhawk in the garden, flying them free every day before school. Fox cubs also came, grew and went as did baby squirrels, hedgehogs and badgers.
Chris found nests, counted eggs and chicks and made maps of all their locations and within a couple of years he embarked on his first proper scientific study The Population and Breeding Density of Kestrels in the Lower Itchen Valley. This was written up in his last year at secondary school and he won the Prince Philip Zoology Prize.
As a young scientist and undergraduate in the Zoology department of Southampton University Chris studied kestrels, shrews and badgers and also embraced Punk Rock, playing in a band.
Post graduation and a cancelled PhD, he began taking still photographs and trained as a wildlife film cameraman. The photography continues but the camerawork gave way to presenting.
Chris began with the award winning 'Really Wild Show' in 1986 and other credits include 'Wildshots', 'Wild Watch', 'Go Wild', 'X-Creatures', 'Postcards from the Wild', 'Hands on Nature', 'Nature's Calendar', 'Springwatch', 'Autumnwatch' and 'Secrets of our Living Planet.'
Chris formed the successful production company 'Head over Heels' with producer Stuart Woodman, making programmes for Animal Planet, National Geographic, ITV and the BBC.
Chris has had the good fortune to travel widely and he has explored many habitats from Antarctic Islands, rainforests, deserts, the Everest range, and the deep oceans, not forgetting some of the planets most notorious nightclubs and drinking dens.
Chris has Aspergers- and invited viewers to take a look into his autistic life with 'Chris Packham- Aspergers and Me' on BBC Two in 2019.
Read More