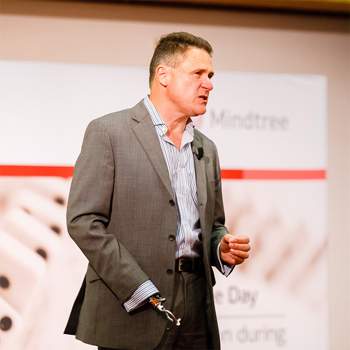 Born in Wiltshire in May 1962. He studied Agriculture at Seale Hayne College Newton Abbot (now Plymouth University faculty of Agriculture). Believing in Service he worked as a volunteer at a centre for the homeless and then joined the army. On graduating from the Royal Military Academy Sandhurst he was commissioned into the Royal Military Police, he also served with several infantry units.

In 1993 he went to work for a British charity The HALO Trust specialising in mine clearance. They recruited a wide range of ex-servicemen, most with two years operational experience. After specialist training from a Royal Engineer bomb disposal officer he supervised and trained former Cambodian soldiers in mine clearance. He is one of the few westerners to have survived abduction by the Khmer Rouge, successfully preventing execution and negotiating his release and that of two Cambodian colleagues from a remote jungle base, finally walking 50km overnight through patrolled and mined jungle.

In 1995 he was blown up walking in a cleared area. He lost his lower right arm and leg, but does not consider himself a victim and accepts total responsibility, because he chose to work in mined areas, whereas people who live there have no choice. He survived against all the odds because of his high level of fitness (he was a keen runner) and because of his knowledge of first aid. After leaving hospital he did a Masters Degree in Security Management at the University of Leicester.

In 1996 he was awarded MBE for services to the HALO Trust clearing anti-personnel mines. In 1998 he was awarded the US Centre for Disability and PALM international leadership award. In March 1999 he was awarded the Snowdon Special Award for leadership and help to the disabled by Lord Snowdon. He has been awarded honorary degrees and doctorates by the universities of Plymouth, Leicester and Exeter.

He set up his own company MTB (Making The Best - his philosophy in life) and is a well-known speaker on the subjects of change management, motivation, leadership and the concept of limitation. His autobiography 'One Step Beyond' was published by Macmillan in 1999.

Less than a year after leaving hospital he completed the London Marathon to raise funds for land mine-injured people in Cambodia. In April 1997 he was the first leg amputee to complete the 250km Great Sahara Run described as the toughest footrace on earth. Competitors run for six days in the heat and sand of the Sahara. They carry their own food, equipment and sleeping bag and have to be self sufficient for the week. He ran to raise £100,000 for an International Committee of the Red Cross centre providing false limbs in Vietnam, to push the bounds of prosthetics further and to challenge the concept of limitation.

In July 1997 he ran 200 km in four days with the Australian Army to assist mine victims. He runs to raise funds for charities assisting the disabled and carried the Olympic torch into the stadium in the Nagano Winter Olympics in Japan in February 1998. He ran from Hakone to Tokyo to raise funds for a Japanese charity.

In April of the same year he started and ran the Flora London Marathon (the first person to ever do this), captaining a team of 500 runners raising funds for various charities. In September 1998 he completed the 'Outback Challenge' with John Bryant runner and journalist through some of the toughest arid outback and mountain country in Australia to raise funds to support mine action programmes. May 15- 31 1999 he ran the length of Cambodia (700km) to try to change attitudes towards the disabled, raise funds to help them and to support requests for the Cambodian government to ratify the Ottawa Treaty. He was supported by a team from the Red Cross.

In July 1999 he was the first amputee to complete the Badwater Death Valley Ultra-marathon. 136 miles (5 marathons back to back) in temperatures similar those recommended for slow cooking chicken. In April 2000 he jointly led a party climbing Kilimanjaro on a new north route. In May 2000 he completed the 100 km Kumamoto volcano run in Japan and in July 2000 was one of only 12 people in the world to do the Death Valley 300 miles, from the lowest point of the USA continuously on foot to the highest point and back again in just over six days in temperatures over 130 degrees Fahrenheit. He did it again in 2001 to test false legs and is one of only a handful of people in the world to complete this double desert crossing twice.

Chris Moon is a well-known speaker on the subjects of change management, motivation, leadership and the concept of limitation. Chris has produced CDs on his thoughts and practical steps on how to make your dreams come true, entitled "Success and Acheivement in the marathon of life".

He has spoken at various events for businesses and organisations large and small and is considered to be a world class speaker in his field.

"I found Chris entertaining in his own right (given his horrific story) and credible on the motivational side.  He's very much a rationalist, trying to get people to be realistic and analytical about adversity, rather than dishing out trite self-help mumbo jumbo.  He was confident, articulate and likeable and the predominantly male audience appreciated his humour and attitude to life."  Chris spoke at a professional investor seminar for Swiss & Global Asset Management - October 2012