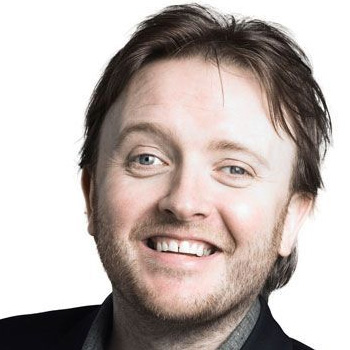 Chris is a blind stand-up comedian (in fact the only professional one in the world), writer, and actor. Originally from Liverpool, he moved south in the mid 90s to study Software Engineering at Kingston University and never went back.

Chris has a genetic eyesight condition called Retinitis Pigmentosa, or RP for short. RP is a degenerative retinal disease, so although he’s had the condition since birth, and his eyesight has always been far from perfect, his sight has just steadily deteriorated over the years.

After finishing University Chris was a Website Designer by trade, but as his eyesight got worse and worse, the websites just got uglier and uglier! These days his sight isn’t completely black, but there’s nothing left of any use. Chris describes it as like looking through a bathroom window in the rain”,

Chris has been performing stand-up since 2003, and is firmly established at the top of the UK’s live comedy circuit. You can catch Chris performing all over the country, including regularly at the world famous Comedy Store in the heart of London’s West End. He has also performed all over the world, including India, Singapore, Malaysia, across the Middle East, and throughout Europe.

As an actor he has had roles in

Between 2005 and 2012, Chris took six different stand-up shows to the Edinburgh Festival, and in 2011 was awarded the Creative Diversity Award for Comedy by a Channel 4 led panel of broadcasters that included the BBC, ITV, and Sky.

He lives on the SW London/Surrey border with his wife and young daughter, about whom he shares his experiences of fatherhood in the dark, on his Blind Dad Blog.