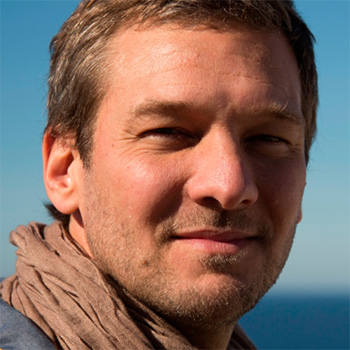 Charlie Luxton is passionate about sustainability and architecture. He has spent the last 10 years designing and building sustainable buildings, making television programmes about architecture and design, working on environmental community projects, and giving talks on all aspects of sustainability.
He is passionate about creating architecture fit for the 21st century; designs that respond to local materials, traditions and climate.
Charlie's television career began in 1999 behind the camera, art directing a short film for a friend.  While studying at the RCA in 2000 he answered an advert from Channel Five looking for a presenter for a series called Modern British Architects... he hasn't looked back since.
His extensive list of television credits include:
Behind Closed Doors, I Own Britain's Best Home and Build a New Life in the Country (Channel 5); DIY SOS: The Big Build and Britain's Hidden Heritage (BBC1);  The Great Treehouse Challenge on SKY1 in 2011; Brick by Brick: Rebuilding Britain (BBC2);  Culture Show BBC2 in 2012; Britain's Hidden Heritage BBC1 in 2012 and Culture Show: Architecture Special BBC2 in 2013.
Born in Sydney, Australia Charlie has lived in England since 1983. He was a founding director of Free State, the design and communications company. Projects include Zoomorphic, an exhibition for the V&A and Electric Storm, a 3 month renewable energy event on the South Bank in London.
Charlie's passion for sustainability and the environment extends beyond his professional work to include his home life. He has completed an eco-friendly renovation on his own home, and his village of Hook Norton, Oxfordshire is a winning low-carbon community, awarded the Government's Low Carbon Community Challenge grant of £400,000.
Charlie regularly gives talks and presentations to a wide range of audiences about all aspects of the built environment and sustainability.  Whether talking about airport terminals or termites he is always passionate, accessible and informative. He has lectured, hosted awards and facilitated conferences for clients as varied as The Eden Project, MacDonalds, Sovereign Housing Group, National Energy Foundation, Autocad and many Architectural trade associations.
He can speak in both a keynote and after dinner capacity, and his speeches have covered a wide range of topics relating to architecture, sustainability and design, from offices and housing to termites and fog basking beetles!  He draws on his passion for sustainability, often focusing on green-living, sustainable architecture and the role climate change has in altering the built environment. Charlie can tailor his speeches to cover a series of core messages that empower the listener to view climate change as a key driver to positive outcomes in society, rather than just negative, referencing the client's achievements in this area to help illustrate the wider issues.
Read More