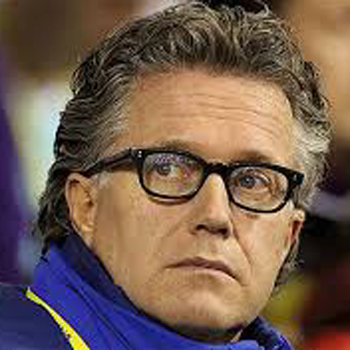 Charles Van Commenee is the Head Coach of UK Athletics and one of the most respected athletics coaches in the world. Dubbed the ''Volcano'', the disciplinarian Dutchman makes a habit of exceeding targets and pushing his athletes to the limit.
On the 1st January 2009 Charles became the man in charge of performance for the entire UK Athletics team.  Just 18 months into this demanding role, Charles steered the British Athletics Team to its most successful European Championships with 19 medals at the Barcelona Games. Charles' focus then was to lead the athletics team to the London 2012 Olympic Games where Team GB won 4 Gold, 1 Silver and 1 Bronze athletics medals.
Charles  is perfect for Senior Leadership Conferences as he challenges delegates to really push themselves in order to be the best that they can possibly be. He is meticulous in the detail, planning and preparation that is required for a team to perform at the very highest level. In his capacity as Chef de Mission for the Netherlands Olympic Team in Beijing, Charles gained huge experience in managing a team of 400 people with the nation watching. His time dealing with Head Coaches and Chairman's/CEO's of the federations during his four years tenure was another valuable experience, and he is now one of the world's leading experts on Performance Management. During his presentation he offers delegates simple strategies and ideas to get the best out of their people in their own environment.
He started his professional career as a technical director and national coach for the Netherlands and then took a similar role for the British athletics team in 2001.
Charles first became involved in coaching at the age of eighteen; he began teaching children while studying for a degree in physical education. After completing his military service in 1981 he dedicated himself to coaching full time and in 1987 he was appointed as the coach for the Dutch javelin team.
Building upon this coaching success, in 1992 he was promoted to technical director of combined events and throws by the Dutch athletics federation. He took on other coaching responsibilities, including shot-put thrower Huang Zhihong, a double world champion.  Charles felt that he was as much a mentor for Huang as he was a coach.  Van Commenee had helped her adapt to the western world, at the same time as he helped her to a World Championship medal.
In 1994 Charles started working with heptathlete Denise Lewis. Impressed with his work, she moved to Amsterdam to train with Van Commenee in 1997. Lewis went on become champion at both the Commonwealth Games and European Championships in 1998 and won silver at the 1999 World Championships. At the 2000 Sydney Games and after 6 successful years and despite the fact that she was injured she took gold to become Olympic Champion. She put much of her success and 'drive to win' down to the fact that Van Commenee had been so focused.
Following his success with Lewis, in 2001 he was appointed by UK Athletics as the technical director for the jumps and combined events. As director he took on responsibilities for British athletes including Dean Macey, Ashia Hansen and Jonathan Edwards, though they all retained personal coaches.
In 2003 Kelly Sotherton joined his training group. Ranked 57th in the world for the heptathlon, she went onto to win bronze at the 2004 Athens Olympics.
At the 2008 Olympic Games in Beijing Charles was as Chef de Mission for the Dutch Olympic Team where he not only had to deal with performance issues but also with issues in the area of human rights, representation, media, commercial interest of the Olympic sponsors.
Charles delivered a one hour presentation on Leadership and Coaching at our annual conference. His messages and core themes were perfectly aligned to what we expect from our leaders and his coaching philosophy was one that we can all learn from and apply. His no compromise approach to accountability will ring true to any organisation that is serious about performance.  Santander
Read More