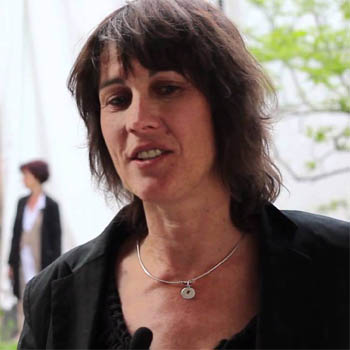 Catherine Destivelle is an Algerian-born French solo rock climber and mountaineer who was raised in Paris. Her family had moved to France when she was a teenager. After leaving school she studied physiotherapy at the Ecole de kinésithérapie de Paris, working as a physiotherapist from 1981 to 1985.
An enthusiastic climber as a teenager, she climbed in the FreÃ¿r massif and the Dolomites, she began her full time rock and mountain climbing career in 1985 and won Sportroccia, the first international competition in Italy (It later became the Rock Master annual competition).
In 1992 she became the first woman to complete a solo ascent of the Eiger's north face. She completed the climb in winter in seventeen hours.
Other notable climbs include the Bonatti Route on the north face of the Matterhorn and the southwest pillar of the Aiguille du Dru (the Bonatti Pillar).
With her fellow Alpine climber, Érik Decamp, she climbed the southwest face of Shishapangma in Tibet in 1994 as well as the icefall near Namche Bazaar, Nepal in 1997. During their 1996 expedition to Antarctica, they made the first ascent of "Peak 4111" in the Ellsworth Mountains before the expedition was cut short after Catherine fell 66 ft from the summit and received a compound leg fracture. The couple married in 1996 and their son, Victor, was born the following year.
Catherine Destivelle began to cut back on solo climbs in the late 1990s and developed an active career as a lecturer and writer. She has been the subject of several documentaries, including French director Rémy Tezier's 'Beyond the Summits' (Au-delÃ  des cimes), which won the award for best feature-length mountain film at the 2009 Banff Mountain Film Festival.
Read More