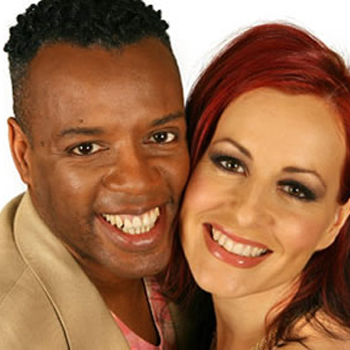 Carrie and David Grant are probably the best known pop vocal coaches in the UK. With a client list that includes Take That, The Spice Girls, Gwyneth Paltrow, Charlotte Church, The Saturdays, Lemar and Will Young.
Their involvement with Fame Academy brought them to the attention of the nation and subsequently they were vocal coaches on “Comic Relief Does Fame Academy" and “Pop Idol".
In the early 1980's David  was a vocalist with Linx and had four Top Twenty singles - "Intuition", "Throw away the key", "So this is Romance" and "You're Lying."  When the band split in 1983 David went solo and had three Top 30 hits. In all he has had 14 hit singles in the UK charts. He has also presented various TV shows, including “Riverside", “CDQ" and Mike Read's “Pop Quiz".  He is now a top-session singer,  vocal arranger and vocal producer, appearing on Jools Holland's “Later".
Carrie was  a dancer on Top of the Pops before presenting on children's television. She appeared on “How Dare You" (Tyne Tees), "Freeze Frame" and the BBC's award winning series “Heart and Soul" (BBC1). As a top session singer she worked with Diana Ross, Roberta Flack, Rod Stewart, Lighthouse Family and Fat Boy Slim.
David and Carrie recorded a hit gospel album "Watching and Waiting" which won them a prestigious MOBO Award as best gospel album for 1998. Carrie followed this with vocal coaching and producing, working with some of the top pop acts in the US, Europe and the UK.
As well as being two of the foremost vocal coaches in the UK, Carrie and David run Senior Business Management training courses. Interactively using the medium of music, they have trained clients from the Foreign Office, Body Shop, Orange, Skandia, Skanska, Pfizer and Express Newspapers. Their programmes cover strategy and leadership, change management and team building.
David takes a keen interest in politics and current affairs and frequently appears on “Daily Politics" and “BBC Breakfast News".
Together Carrie and David are also involved in mentoring, supporting young people in the Arts. They have presented The Teaching Awards and various Education and Learning Awards. David is also an Ambassador for UK Skills.
Carrie and David are passionate about singing and have released their award winning vocal coaching DVD “You Can Sing" and book “Total Singing Tutor" to help both beginners and professionals who wish to get the best from their singing voices. Their commitment to singing is huge and they are often involved with events where they coach an audience to sing. In 2007 Carrie and David received the prestigious Gold Badge Award presented by The British Academy of Composers and Songwriters in recognition of their outstanding contribution to British music.
Read More