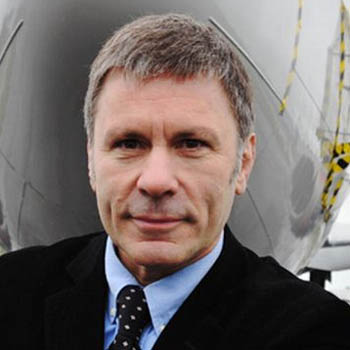 Bruce Dickinson is the lead singer of Iron Maiden, a commercial pilot, business angel, entrepreneur and creative business thinker.  He was a pilot and marketing director for Astraeus Airlines, which recently went into administration,  and is now in the process of leading them out of liquidation.
His evident entrepreneurial spirit has also seen him obtain government funding to create an aircraft maintenance company, creating 1500 jobs in Wales and he is also involved in an airship venture to manufacture drones which have both a military and a commercial application.
He is also setting up a training company (Real World Aviation) to train pilots of the future.

Bruce left Iron Maiden in 1993 in order to pursue a solo career, as well as his passion for fencing and to  become a pilot.  He re-joined the band in 1999 and since then has released four albums; despite these demands on his time he hasn't stopped flying Boeing 757s.

Bruce talks about his different projects,  tying them in with the challenges of business start-ups, entrepreneurship and business creativity. In addition he is also happy to talk about the parallels between his music and business careers and can deliver team building experiences focused around his flight simulator.
In his presentations, Bruce provides fascinating insights into:
Bruce can also offer a glimpse into the potential future of air travel and the opportunities that it may present.
His autobiography 'What Does This Button Do?' (published 2017) is an up-close look inside the life, heart, and mind of one of the most unique and interesting men in the world; a true icon of rock.
Read More