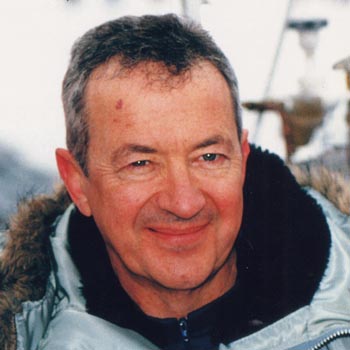 In March 1999 Brian Jones and his fellow pilot Bertrand Piccard became the first men to circumnavigate the world by balloon. This final great aviation, which had eluded so many, perhaps most notably Sir Richard Branson, was accomplished by making the longest and furthest flight in history - in any form of flying machine within the earth`s atmosphere. Seven world records were established.

Brian has a fascinating story to tell, entertaining his audiences while delivering an inspirational and motivational speech.

To fly a balloon around the world is no simple feat. Some may say that it depends entirely on luck.  It doesn't.  In ballooning, as in business, you create your own luck.  You use your knowledge, skills, imagination and expertise to exploit the opportunities presented to you.  Certainly you need to plan, but you must also respond rapidly and flexibly when unexpected challenges arise.

If the winds and weather that carried Breitling Orbiter 3 around the world are a vivid metaphor for the global business environment, then the Orbiter team and its two pilots are the epitome of the successful business team.

During his talk, the audience will draw on the strong parallels between the adventure and how their enterprise, and the teams within it, must operate in their chosen fields to achieve their goals.  He speaks from experience of both sides of the Breitling Orbiter endeavour.  As project manager, he was acutely aware of the importance of careful planning, motivating the team and of getting things right first time - after all, many of the balloon's systems could only be tested after take-off!  Then, as a pilot on the journey itself, he was called upon to show personal courage, determination and ingenuity, often in situations over which he had no direct control.

He emphasises that it is the whole team that matters, not just the pilots. He will highlight the contributions of the unsung heroes of the Breitling Orbiter team - like the meteorologists who, working with an innate understanding of their subject, made the crucial recommendation to take the balloon on a never before attempted southern route across the Pacific Ocean.  In these circumstances it is not only expertise that matters, but trust.