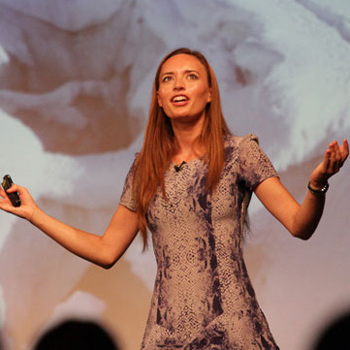 Aged 20, Bonita, who had never climbed a mountain before, announced to family and friends she was going to one day climb Mount Everest. Responses were as follows:

"This is ridiculous. You'll die"

"If you get the sponsorship to climb Everest in this recession, I'll eat my hat"

"You're too old to start climbing, surely?"

Fast forward three years. Aged 23, Bonita Norris became the youngest person to have stood at both 'tops of the world', the summit of Mt Everest (2010) alongside her sherpa friend Lakpa, and at the geographic North Pole (2011)

Bonita has now completed five Himalayan expeditions and met the Queen at Buckingham Palace as a British adventurer. She now travels the world working as a TV presenter, and has worked with some of the world's most recognisable brands: Red Bull, Tag Heuer, Motorola and Nissan. She is also a brand ambassador for Karrimor alongside one of her sporting heroes James Cracknell.

Bonita's talk charts her rise from novice climber with a dream. She takes her audience on a journey, from the moment she makes her decision, to the toils of raising sponsorship and the intense training required for a Himalayan expedition. Finally she uses stunning photographs and tells her up close and personal anecdotes of what it's actually like to climb the world's highest mountain. Bonita's story is about taking on a big risk, of commitment, and of a personal struggle. The presentation is suitable for both corporate and school presentations.