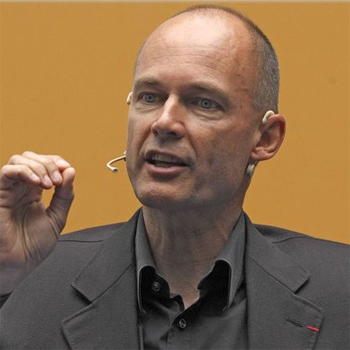 After his round-the-world flight, Dr Bertrand Piccard became a sought-after corporate and public speaker.  He understands that his audience isn't there to learn how to fly a balloon, but rather to find a source of inspiration for their private or professional lives.
Using his aerial exploits as a backdrop, Bertrand Piccard illustrates his concept of the psychology of life, human communication, team-work, motivation, pioneering spirit, as well as how to deal with stress, uncertainty and crises. At the request of some audiences, he also covers medical topics such as the use of hypnosis and self-hypnosis.
Since 1992, he has featured at several hundred public or private gatherings in America, Asia, Europe and Africa.
The first ever non-stop balloon flight around the world brought Bertrand Piccard fame as the "scientist-adventurer."
Born into a dynasty of explorers and scientists who conquered the heights and the depths of our planet, Bertrand Piccard seemed predestined to pursue one of the greatest family adventures of the 20th century. As a psychiatrist, aeronaut, internationally renowned public speaker, president of the "Winds of Hope" humanitarian foundation and Goodwill Ambassador for the United Nations, Bertrand Piccard aims to combine his family's scientific legacy with his commitment to exploring the great adventure of life.
In his headline lecture entitled "Adventure is a state of mind: the metaphor of the first around-the-world balloon flight", Bertrand Piccard explains how flying in a balloon symbolises a new relationship between humans, technology and nature.
His lecture topics include:
Be a balloonist in your business
Team spirit and psychology of communication
How to play with the winds of life
Coping with crisis situations
Managing stress
Read More