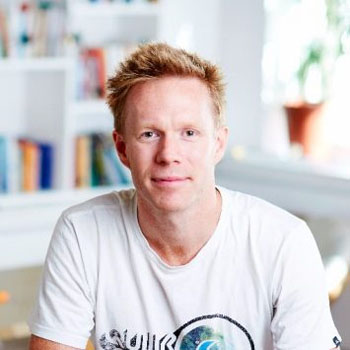 Ben Keene and business partner Mark James launched Tribewanted in a torrent of media coverage. It was a bold idea with potentially enormous consequences for tourism: the creation of an eco-friendly sustainable community existing simultaneously in the virtual world of the internet and on an actual desert island.

Since leaving university, Ben had spent his time travelling the world working with gap-year students on community projects and met Mark through the internet and the concept of Tribewanted was born.

They looked at islands all over the world, typical starting price one million dollars. Then they got lucky. Their searches led them to a specialist island broker who pointed them towards Vorovoro, off the wild north coast of Fiji. With just enough money on Ben's credit card for two return tickets, they decided to go and have a look. As soon as they saw it, they knew. It was small, only two hundred acres. It had a beach, blue sea, hills, land for planting. The first hurdle was getting the agreement of the owner of the land, the local chief. The chief had seen a bit of the world. One of his advisers was his nephew, who had a degree in law from Hull University and was a specialist in aboriginal land rights. The men had seen what had happened to other idyllic Fijian islands, and did not want to lose their ancestral lands to a large hotel complex or a marina.

On the basis of a handshake and the presentation of a tambua - the tooth of a sperm whale - the historical contractual device of the Fijians, the agreement was made. The Chief would lease 20 acres of land to the enthusiastic young Englishmen for three years for £47,000 with an extra £20,000 for rent and community donations payable over the term.

Since then, on Vorovoro, at John Obey Beach in Sierra Leone, in the Umbrian hills, and in partnership with projects in Hubud, Bali and Gonubalabala, Papua New Guinea, Ben has been working with communities and welcomed over 3.000 visiting tribe-members, students, families and curious travellers.

They’ve generated over $3m in revenues and invested into the local projects and supported over 100 jobs.