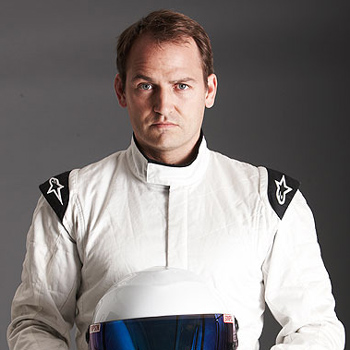 There are very few drivers like Ben Collins. He has raced successfully in almost every class imaginable, from Formula 3 and Le Mans to American Stock Car Racing. As the Stig, Ben Collins was the benchmark of speed against which all other drivers set themselves, and the man that everyone from Nigel Mansell to Jenson Button tried and failed to beat. Jackie Stewart, watching a young Ben win a Formula 3 race, was blown away, When you see the likes of Ben Collins in Formula One, remember you saw them here first. It was, however, the moment Ben disguised himself in white suit and helmet, that he became instantly recognisable.

Ben has put every known supercar to the test, racing the world's greatest cars, from the Bugatti Veyron and Ferrari 430 Scuderia to a London Routemaster. From the anonymity of his white helmet he taught some of the world's most famous stars how to lay down a fast racing lap, managed to catch a parachutist in his moving car and coached a blind man how to take on a chicane. Few others, if any, have taken on a British Army tank division in a Mitsubishi Evo 7.

Ben is most famous for his role as the Stig, but he is respected as a focussed and successful businessman. Collins Autosport has supplied precision drivers for 'Top Gear' and Hollywood, with Ben commanding James Bond's Aston Martin in the last James Bond film, Quantum of Solace, and performing as Nic Cage's driving stunt double.  Ben's company offers the ultimate driving challenge in some of the fastest cars on the planet to an international clientele who are looking to take driving to a whole new level

As a journalist, Ben writes for Autosport and The Sunday Times and is currently a presenter for Channel Five's 'Fifth Gear' programme, pitting his skills against ex-professional racers Tiff Needell and Jason Plato.

Ben's bestselling book, The Man in the White Suit (The Stig, Le Mans, The Fast Lane and Me) charts a life of passion, commitment and a determination to succeed in the highly competitive adrenalin fuelled world of motor sports.

He's in demand as an after dinner and motivational speaker, with his wealth of stories from eight years on 'Top Gear' and coaching celebrities for the programme and in Hollywood.

Ben spoke superbly about his time at Top Gear, his experiences with the celebrities he met along the way and his experiences of being a stunt driver for the Bond film.  He showed us some excellent photographs of life behind the scenes at Top Gear and some of the incredible stunts he has performed as a driver. He also talked about his racing career, which was fascinating.  He is a very popular speaker, and we have received much feedback from our clients letting us know how much they enjoyed listening to Ben.''  Feedback for Ben speaking at a client conference for Savills.