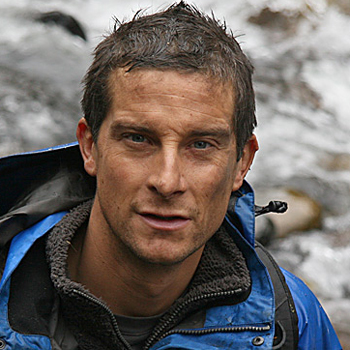 Life is always an adventure for Bear Grylls.

He has become known around the world as one of the most recognised faces of survival and outdoor adventure. His journey to this acclaim started in the UK on the Isle of Wight, where his late father taught him to climb and sail. Trained from a young age in martial arts, Bear went on to spend three years as a soldier in the British Special Forces, serving with 21 SAS. It was here that he perfected many of the skills that his fans all over the world enjoy watching him pit against mother-nature.

Despite a free-fall parachuting accident in Africa, where he broke his back in three places, and after enduring months in military rehabilitation, Bear went on to become one of the youngest ever climbers (aged 23) to reach the summit of Mount Everest. Since then he has circumnavigated Britain on a jet ski powered by renewable fuel, and was the first person to canoe the antarctic and to paraglide over Everest. A born adventurer!

Bear went on to star in the Channel 4 series: Escape to the Legion and seven series of the Discovery Channel's Emmy nominated TV show Man Vs Wild and Born Survivor, which has become one of the most watched shows on the planet, reaching an estimated 1.2 billion viewers.

He has led record-breaking expeditions, from Antarctica to the Arctic, raising over $2.5m for children around the world. In recognition of his expertise and service, Bear was appointed the youngest ever Chief Scout to over half a million scouts in the UK, was awarded an honorary commission as a Lieutenant-Commander in the Royal Navy and  a Lieutenant-Colonel in the notoriously tough Royal Marines Commandos.

He has written many books, including the No 1 Bestseller Mud Sweat & Tears which was voted the most influential book in China for 2012. Other titles include: True Grit, A Survival Guide For Life, Born Survivor, Living Wild, Great Outdoor Adventures, Facing Up, Facing the Frozen Ocean, To My Sons and seven children's fiction novels titled Mission: Survival.

In America, Bear's US TV series: Get Out Alive with Bear Grylls was broadcast on NBC and voted the No 1 new network reality show in the 18-49 age category. The show aired worldwide on Discovery Channel alongside a further series: Bear Grylls: Escape from Hell and Bear Grylls: Extreme Survival Caught on Camera.

"Our thanks for your professional and inspirational contribution to our lunch, the combination of your particular style and breathtaking video was entirely appropriate and hit all the right notes".
The Institute of Directors

"All our senior Chief Executives had great things to say about Bear, he was a fantastic speaker".
UBS Warburg Senior Team Dinner

“With trademark energy and enthusiasm, Bear scaled breathtaking new heights with BT Global Services’ virtual Sales Kick-Off, helping to empower an entire Banking & Finance division with true-grit determination to strike out for new horizons, ready to embrace failure and become more resilient to grow and succeed in these changing and uncertain times. Unleashed, Bear grappled with every discussion topic with charm, clarity, passion and good humour, inspiring his audience around the world to believe in themselves and go beyond limits. BT would like to thank Bear for well and truly taking this virtual event within sight of the summit.”