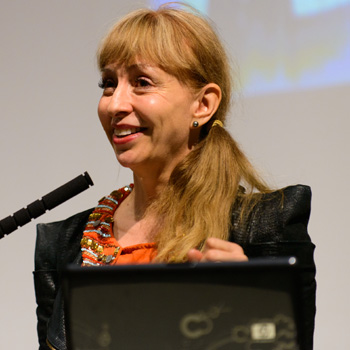 Susan Greenfield is a British neuroscientist, writer, broadcaster and member of The House of Lords. Awarded 30 Honorary Degrees from British and foreign universities she also heads a multi-disciplinary research group exploring novel brain mechanisms linked to neurodegenerative diseases such Alzheimer‘s and Parkinson‘s. Susan is a Senior Research Fellow at Lincoln College, Oxford and has currently co-founded a biotech company developing a novel approach to neurodegenerative disorders (Neuro-Bio Ltd).
In addition, she has published a neuroscientific theory of consciousness,'The Private Life of the Brain' (2003) and developed a keen interest in the impact of modern technologies on how young people think and feel. This was discussed in her book, 'ID: The Quest for Identity in the 21st Century' (2008).
Recipient of the Michael Faraday Medal from the Royal Society in 1998 , was awarded a CBE in the Millennium New Year‘s Honours List and was granted a non-political Life Peerage in 2001.
She was elected to an Honorary Fellowship of the Royal College of Physicians in 2000 and in 2007 to an Honorary Fellowship of the Royal Society of Edinburgh. Appointed Chancellor of Heriot Watt University in 2005.
Further recognition of her work includes L‘Ordre National de la Légion d‘Honneur from the French Government, and the American Academy of Achievement Golden Plate Award, both received in 2003. Susan was also awarded the Australian Medical Research Society Medal in 2010.
Susan joined the Advisory Board of the Kusuma School of Biological Sciences at the Indian Institute for Technology, Delhi in 2011.
In 2012, Susan was offered the Honorary Fellowship of the Institute of Risk Management and also became a Vice Patron of POWER International. Further on in 2012, Susan was selected to serve as the Parliamentary Patron of the Westminster Higher Education Forum, alongside of continuing to be a Parliamentary Patron of the Westminster Education Forum.
In 2012 Susan bacame a Governor of The Florey Institute for Neuroscience and Mental Health and also started to suport the IAB (the International Advisory Board).
In January 2014, she was included in the Debrett's 500, "a recognition of the most influential and inspiring 500 people in Britain.". Most recently, in July 2014, Susan was awarded as an Honorary Doctorate at Middlesex University.
Read More