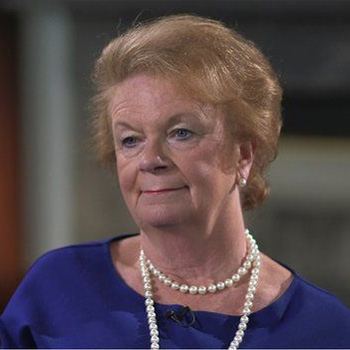 Helen Liddell, Baroness Liddell of Coatdyke, was formerly Labour MP for Monklands East from 1994 to 1997 and for Airdrie and Shotts until 2005.
Before becoming a Cabinet Minister, Helen held a number of Ministerial appointments including Treasury Minister and Energy Minister, when she developed initiatives to protect the UK Offshore Oil ad Gas Industry when the price of oil fell to $10 a barrel. She took part in the negotiations and planning that led to the introduction of the Euro, the liberalisation of European and British Energy Markets, and the creation of a more competitive EU. She was also an Education Minister and Transport Minister, and ended her political career by becoming the first woman Secretary of State for Scotland in 150 years. She left the British Parliament in 2005, to move to Australia for a four year posting as British High Commissioner.
A businesswoman in her own right, she was CEO of Business Ventures, dealing with high tech business start ups. She was previously an Executive Director of Scottish Daily Record and Sunday Mail Ltd and was seconded to the management of the PLC, Mirror Group Newspapers, where she dealt with corporate relations in the period following the discovery of a major and high profile crisis based on the pensions funds of both MGN PLC and the associated printing company.
She has been employed as a consultant to British Energy to assist in developing the strategy for a new generation of nuclear reactors in the UK.
Helen was elevated to the House of Lords in 2010 and took part in the review into the circumstances surrounding the helicopter crash on the Mull of Kintyre. Her interest in Defence and Security matters led to her joining the Joint Committee on the Prevention of Terrorism.
She is a member of the board of Visit Britain and is also an Association Member of BUPA.
An experienced broadcaster (she was a BBC economics correspondent) Helen has proven leadership skills and is a driver of change by instinct and experience. A skilled communicator and negotiator, with excellent judgement, she has strategic vision and has front line crisis management experience.
Working at the heart of Mirror Group following the company's financial crisis, she helped develop and implement the crisis management strategy which allowed the company to continue trading. She led the Investor Relations team and successfully managed the first AGM following the crisis.
With decades of experience in chairmanship and human resource management, Helen is in demand as a speaker on a number of subjects.
Read More