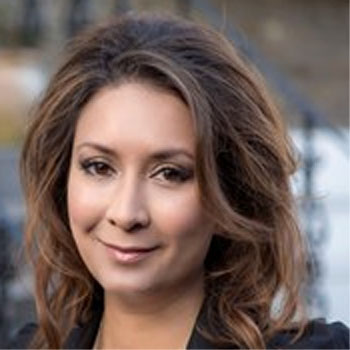 Growing up in Glasgow with first generation Indian immigrant parents, Ayesha was a self-confessed outsider, not quite fitting in at school and protesting against her traditional roots. She became a little bit of a rebel!

Whilst studying Law at the University of Hull, she fell into the civil service and started moonlighting as a stand-up comedian in order to tackle work stresses. Gigging about three or four times a week, Ayesha developed a real talent and love for the circuit.

During this time she went to the Edinburgh Fringe Festival and became was a semi finalist in the BBC and Channel 4 new talent competitions.

Eventually, work took over and Ayesha became a "round the clock" advisor to leading members of the Labour party including Harriet Harman and Ed Miliband.

Her unique position in the front lines of government, prepping leaders for Prime Minister’s Questions, live media speeches and policy changes means she can brilliantly comment on current affairs and tumultuous times in government.

Regularly appearing on television and radio Ayesha is well-versed at standing up in public. Working with Harriet Harman to lead Labour’s pink bus campaign to canvas women’s votes, Ayesha forcefully promotes equality and diversity in all her work.

Leaving the civil  service and Westminster, Ayesha has turned back to her old love comedy. Combining tales of her time as a special advisor with some great impressions of senior government figures, Ayesha’s comedy is a force to be reckoned with and results in her being a very popular corporate speaker.