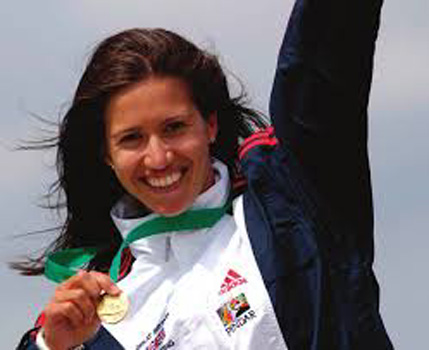 Since retiring from the world of elite sport, Anna has founded Beyond the Barriers, a company which is dedicated to improving the health, performance and resilience of individuals in both the sporting and business environments. Drawing on the lessons from sport they help individuals and teams to perform at their best in challenging environments.

In addition, Anna continues to inspire audiences with anecdotes from the World Championship and Olympic Games. Hers is a tale of triumph over adversity.  In April 2003 Anna was diagnosed with Chronic Fatigue Syndrome and she was told by medical experts she might never race again. But despite being told that there was no solution, Anna‘s ˜never give up‘ attitude enabled her to make a full recovery.

Between 2005 and 2007 she went on to win a hat-trick of three world titles in a row and to become an Olympian for the second time competing at the 2008 Beijing Olympics. Anna has a staggering eleven World and European Championship medals, confirming her status as Britain‘s most successful ever female canoeist.

Anna‘s achievements were recognised at the Sunday Times Sports Woman of the Year Awards, where she won the 2005 Champions Award and then again in 2007 when she was voted BBC London Sports Personality of the Year.  She was then awarded an MBE in the 2010 New Year‘s honours list for her services to sport.

In 2001 Anna graduated from Royal Holloway College, University of London with a BSC Honours degree in Economics and Management (2:1) and in 2007 the University recognised Anna‘s achievements and awarded her with an Honorary Fellowship.

Anna also works as a presenter and commentator for BBC and Eurosport.

"Anna's personal story of triumph over adversity and her commitment to continuous and never ending improvement was the perfect motivation for my team....  I highly recommend both Beyond the Barriers and Anna for any corporate function."   Virgin Media Business
"Her story of triumph over adversity and the importance of resilience in pushing for success were extremely well received by the team.  Anna is a fantastic presenter and engages with her audience in an assuming way which keeps you listening to the very end.  If you are looking for a sporting champion who   understands how to align her message with your specific strategy and challenges then look no further than Anna."  Life Fitness
“Anna did a fantastic job of bringing to life how the lessons learnt as an elite athlete can be transferred into the work place to help cope with the constant pressure and change we face there was a real buzz in the room after her presentation and feedback has been excellent with several people asking to contact Anna directly to thank her for such an inspirational presentation. This sort of response is not easy to get from a roomful of marketing professionals!   Head of Sponsorship & Events, E.ON UK

"Anna is one of the most extraordinary people I have ever met. Who could fail to learn and be inspired by someone with such drive and commitment."  Gary Lineker