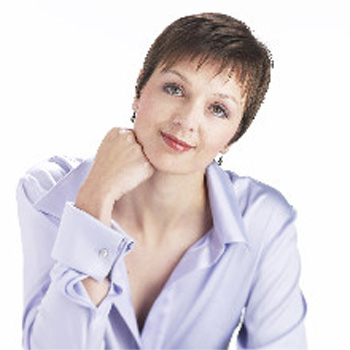 Angela is a very bright and personable presenter who is a specialist in IT with a First Class Honours Degree in Systems Analysis and Accountancy, she is also a member of MENSA. She left University with a defined career plan - to be a systems analyst [designer of computer systems]. She started out with IBM then moved on to a fast paced software house called SD-Scicon, followed by British Gas. By the age of 25ys Angela was the youngest ever female Manager at British Gas.

She was then selected by them to tour the Country presenting the IEE's prestigious Faraday Lecture, visiting 18 venues including The Barbican. In total she delivered the lecture 65 times with up to 3000 people in each audience, plus a world wide audience via satellite links. This culminated with her being offered a presenting job for the BBC.

Angela has also presented numerous corporate videos for clients including Clarks Shoes, Conoco, The Cotswold Water Park, Coventry University, Courts, Ericsson, Homebase, Roche, School Support Centre  and Triton. Another talent that Angela is able to offer to the Corporate world is that of Presentation Training & Coaching Programmes. From the complete beginner or nervous wreck, to conference speaker and corporate spokesperson, all can benefit from her knowledge and experience within this field.

"Orange were delighted with Angela's contribution, her professionalism and her involvement in the events...For my part, I would also like to add that it was a real pleasure to work with her - she really got involved with the subject matter and was a very valuable member of the whole team."