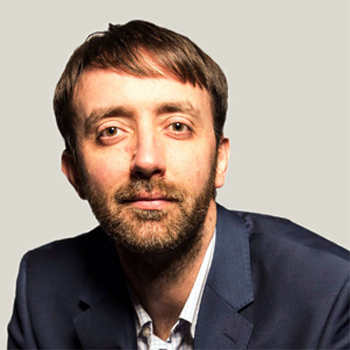 As Kermit said, 'It is not easy being green' - especially if you are, at heart, a bit of a petrol head like Andy Pag.

Andy spent two years driving around the world in an old school bus he salvaged from a scrap yard, powered by used cooking oil.  This journey was part of a series of experimental expeditions searching for a way to travel sustainably.  Andy has also driven a chocolate-powered lorry to Timbuktu in Mali (a world-first carbon negative expedition) and organised the 'Grease to Greece' rally for cars fuelled on restaurant scraps.

Andy is an engineering graduate, former TV producer and award-winning investigative journalist.  His spirit of adventure led to twelve years of leading vehicle-based expeditions to remote parts of Africa and the Sahara Desert. But he became inspired to change elements of his life that were unsustainable, starting by exploring alternative ways of powering his journeys.
Andy's entertaining talks explore how each experimental eco-adventure has taken him closer to understanding exactly what sustainability really means.

Andy's talks are tailored for each event but his key topics are:

Sustainability
Is it possible to find a practical way to travel sustainably?  Andy Pag shares the successes and failures of his entertaining eco-adventures with a thought-provoking and uplifting undercurrent.  From turning four tonnes of waste chocolate into fuel to travel across the Sahara Desert to starting a fire under his vehicle to melt frozen cooking oil in the centre of Tehran, the lessons haven't always been easy.

Facing a Challenge & Tough Times
Locked up in an Indian prison over a bureaucratic mix-up, facing ten years in jail, sleeping on a cold stone floor sandwiched between a murderer and a squat toilet... Andy Pag's two year journey around the world wasn't going to plan.  Mechanical breakdowns of his Biotruck fuelled on chip fat dogged the expedition.  It almost came to an end when he ran out of fuel in a country where they don't eat fries.  Andy shares the upsides of the downs in a funny and lively talk that reveals his insights into staying motivated and finding the silver lining.

Teamwork & Community (Engaging with the World)
After years of searching for sustainable ways to travel, eco-experimenter Andy Pag embarked on a journey so ambitious, it was bound to end in disaster. Strangely it didn't.  Andy puts the unexpected success of his drive around the world fuelled by used cooking oil down to the enthusiasm of people for helping out a stranger.  He shares tales of generosity and friendship and draws surprising conclusions about the power of Community and the secret to being invited in.

Andy speaks fluent Italian, French and some Spanish.  During his time as a investigative journalist, Andy won a Royal Television Society Award for best documentary (2005).

Andy's talks are supported by wonderful images from his travels and film footage where appropriate.  He has a wide range of adventures and experiences to draw upon when tailoring his talks - from being shot at by Senegalese bandits to being presented by Farrero Roche by the British Ambassador in Athens.
"Andy was extremely engaging, authoritative, enthusiastic and yet measured.  He backed up his words with great photos and plenty of good stories. In short, very entertaining and people will remember him and his story."   Deloitte
Read More