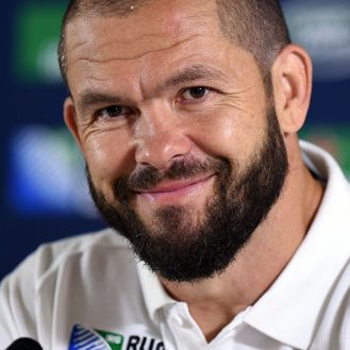 Andy Farrell excelled as a GB Rugby League captain and a Wigan hero before switching to Rugby Union, playing in the 2007 World Cup.  A genuine leader with exceptional qualities, he played a key role in developing a freshly focused 2012 England team that had a strong Six Nations tournament, concluding by beating Ireland at Twickenham in March 2012.

He is a genuine sporting great who has had an extraordinary playing career. Starting out in Rugby League, Andy's natural talent and ability was there for all to see from the early days. He was the youngest player to make a senior first-team debut at 16; the youngest winner of the Challenge Cup aged 17 years 11 months, was the youngest full international at 18 and he became the youngest Player of the Year in 1994. All absolutely remarkable achievements.
Born in Wigan, Andy began playing with local club Orrell St James before debuting for Wigan in 1991. A natural born leader, Andy went on to captain Wigan, making 370 appearances for them and scoring an amazing 2,693 points.
He won five Championships and our Challenge Cups with Wigan, picking up the 1998 Super League and 2002 Challenge Cup as captain. In 2001, Andy set Wigan's club record for most points in a season.
In 2004 he won the Golden Boot as the best player in the world, the Man of Steel Award twice, and the Players Player Award.
Just after being appointed club captain, Andy was given the honour of the Great Britain captaincy in 1996, leading the side on their tour to New Zealand, Papua Guinea and Fiji. He made 34 appearances for Great Britain and also represented England in two World Cups.

A determined, driven and highly motivated individual whose impressive successes as a player and a coach have come about thanks to innate ability, hard work and being able to rise to a challenge. These same qualities are seen in his son Owen who has broken into the England team and is positioned for a very bright future.

Along with his inspirational and leadership qualities Andy is an excellent communicator and has a wealth of experiences to share with an audience, making him an ideal conference or team building event choice.