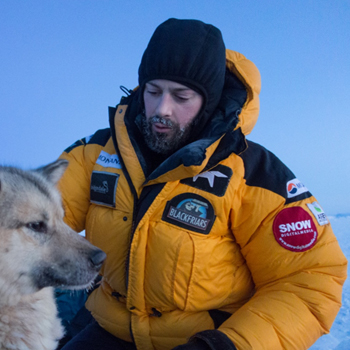 Only 25 years old, he has spent over one hundred and fifty days unsupported in the Arctic and has crossed the second largest icecap on Earth three times.

Alex grew up in Hampshire, was educated in Dorset and read Biology at the University of Oxford.

In 2002, aged fifteen, Alex was one of the youngest people to complete the 125-mile Devizes to Westminster kayak ultra-marathon and in 2005 he competed in the Oxford-Cambridge Varsity Triathlon.  In 2006 Alex won his rowing 'blade' at University of Oxford and began competitively running long-distance races. He also reached the summit of Mont Blanc in the French Alps. In 2007 Alex was elected a Fellow of the Royal Geographical Society, the home of British exploration and led a Greenlandic climbing and sledge-hauling expedition.

In 2008 he led the record-breaking Tiso Trans Greenland expedition which, at 1374 miles, is the longest fully unsupported polar journey in history.

From 2008 Alex spent a period as a Royal Marines Officer and his first book 'The Long Haul', was released in March 2010.

He was elected a member of the prestigious Explorers Club shortly after. In the spring of 2010 Alex guided an international team 350 miles across the Greenland icecap.

In 2011 Alex headed back to the arctic to attempt the record for the fastest speed crossing of the polar ice-cap.

A truly inspiring and motivating speaker, Alex has received outstanding praise for his presentations on both sides of the Atlantic.