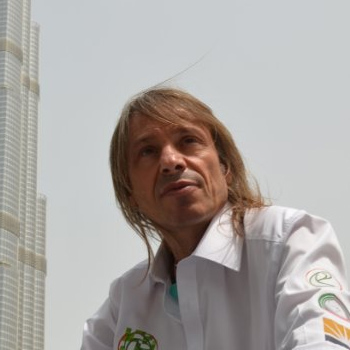 Spiderman Alain Robert is acknowledged by climbers worldwide as being 'the greatest of all time'.  He is the world's greatest daredevil too.
Born in France, Alain has climbed cliffs, mountains and gorges; but it his achievements in conquering 143 of the world's tallest buildings with his bare hands that have bought celebrity status in more than 100 countries. The public and media cannot get enough of the incredible Spiderman and every ascent is greeted with great acclaim.
When he climbed the National Bank of Abu Dhabi, 150,000 people assembled on the streets below.  His climb of the Sapphire Mall, Istanbul attracted more than four hundred TV, press and media personnel and the climb was shown live on four TV stations.
When was engaged by the Russian Government to climb Moscow State University in celebration of Moscow's birthday, 100,000 people attended.  His heroic ascent of the world's tallest building, the Khalifa Burj, Dubai (818m/2720ft) was front page news in every country.
Alain has starred in many TV documentaries worldwide.  He was the subject of a CNN 'Revealed Show' that went to a world audience of 700 million people.
In 2010 he was made a World Ambassador for Zenith Watches of Switzerland, whose brand reflects the pioneering spirit.
Incredibly, in 1982 Alain received terrible career ending injuries in a major fall; as a result of which to this day he remains 66% disabled, suffers from vertigo and epilepsy.  However, despite facing these immense challenges Alain overcame his disabilities turning a hopeless situation, into fabulous international success.
Given his astonishing achievements, the incredible 'Spiderman Alain Robert' is a great motivator and he is fast becoming one of the worlds' most inspiring motivational, keynote and after dinner speakers.  He has given talks internationally for a number of global corporations.
With charisma and humour, Alain talks about his amazing real 'life and near death' experiences, making the point that no matter what the challenges we face, he is living proof that we can all 'reach way past our dreams.'
Read More